Recognised as the pioneer of Paris street art, Blek le Rat (born Xavier Prou in 1952 in Paris) has been painting committed pieces in the streets since the early eighties. He is often described as « the father of stencil graffiti ».

When Blek le Rat visited New York in 1972 this was the very first time he had ever seen graffiti in his life. When he came back to France with colourful graffiti images in mind, Blek enrolled at Ecole des Beaux-Arts de Paris to study etching, seriography and lithography. He then went on studying architecture, learning the impact of space and the creative possibilities of the urban environment. He started stenciling the walls of Paris in 1981 – when street painting had not yet become associated with criminal activity – spray-painting small black rats running along the walls of the fourteenth Arrondissement.

He chose the pseudonym « Blek le Rat » in reference to an Italian comic book « Blek le Roc », using « rat » as an anagram for « art ». Throughout the 1980’s, Blek’s art developed from small pieces into life-size characters like the representation of famous Andy Warhol, Tom Waits, Jesus Christ and a portrait of Blek le Rat himself. The use of stencils, whether for depicting rats or life-size characters, allows him the opportunity for endless reproduction.

Blek chose to paint rats because they symbolise the urban environment as well as the marginalizsd members of society. On New Year’s Eve in 1981, Blek painted a bunch of rats all around the Centre Georges Pompidou, a Modern and Contemporary Art Museum.

In 1991, Blek le Rat was arrested for painting in the street. After this, in order to be quicker and avoid being re-arrested, the artist started pasting up pre-stencilled posters. Since then his work has proved to be more and more committed, denouncing for example the Iraq war in 2004, campaigning for Florence Aubenas in 2005 and raising awareness on the plight of the homeless in France. His committed works made over the last decade have brought him a global audience.

Among his famous posters is The Man Who Walks Through Walls, a self-portrait of the artist himself with the body of Buster Keaton, the artist’s favourite actor, depicting as a traveling man carrying suitcases. Originally created in 2004 for a trip in London which was pasted-up in London, New York, Prague, Buenos Aires, Taipei, Leipzig, Berlin and more recently in Munich in 2016, making it Blek’s most travelled character.

Even though Blek le Rat has expressed preference for working in the streets over galleries, he has held numerous exhibitions throughout the world and has participated in various street art festivals.

Blek le Rat’s work has influenced and inspired many stencil artists like American artists Swoon and Logan Hicks. He is the one who inspired elusive British artist Banksy and especially his painting of stenciled rats. The British artist later confirmed this in his book « Wall and Piece ».

Based on « Blek le Rat : Getting Through the Walls » by Sybille Prou and King Adz. 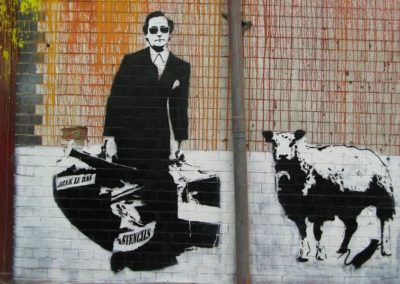 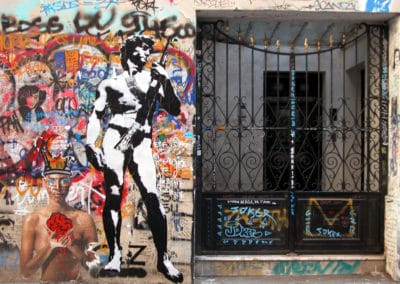 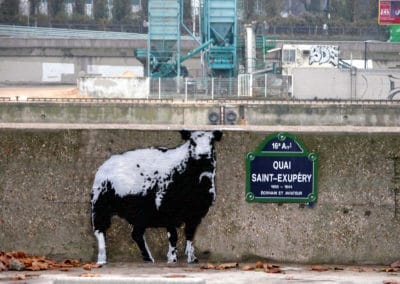 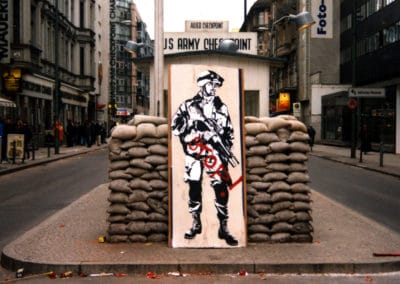 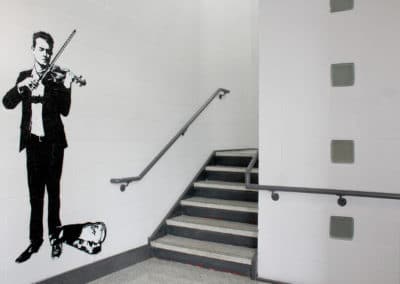 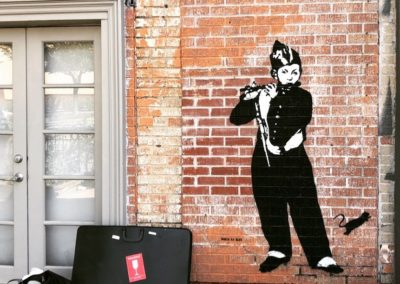 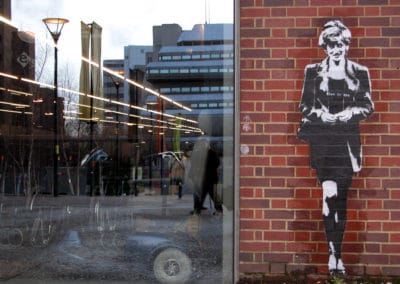 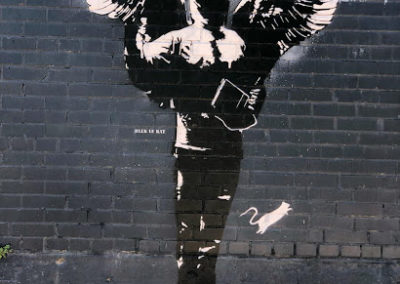 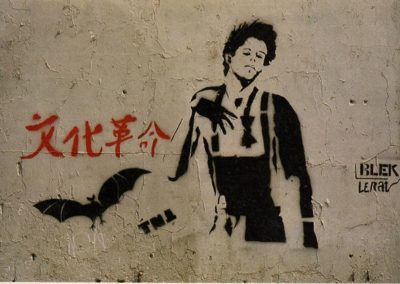 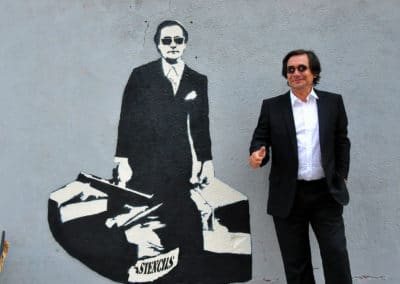