Don Mateo is a French street artist who was born at the beginning of the 1980s and grew up with hip hop and rap culture. The artist picked the name ‘Don Mateo’ as a reference to a certain period of his life when he used to live in Spain. His first experience with graffiti happened when he was 12 years old. He tagged a golden ‘fuck’ on a car which happened to be his teacher’s car. He only carried out projects connected to the city a few years later. In 2010 he moved in Lyon, France’s third largest city, which quickly became a true playground for the artist. Very soon, Don Mateo covered the walls of the city with several powerful portraits.

Those portraits reveal extreme sensibility and poetry. Don Mateo’s art, mostly composed of stencils, revolves around female characters. According to the artist, women inspire tenderness, poetry but also strength. Don Mateo breathes life into the streets of his city by pasting up anonymous characters who can be sometimes full of energy or reminiscent of a tender childhood. Each of them tells a story or expresses ideas. Whatever the message is, Don Mateo’s leitmotiv is to bring colors to the city and stand up against gloom. His style is very recognizable : his stencils mix humor, elegance and provocation. He likes to consider himself as a painter who brings positive vibes to passersby.

For the artist, the street is like an open-air workshop where he can best express himself. The street is the ultimate place where he can express his views on society through a socially conscious art. For more than twenty years now, social commitment and painting have been Don Mateo’s most faithful life companions. In 2013, he carried out the ‘Wonderful Walls’ exhibition in Lyon, a project against discrimination. For his last exhibition, entitled ‘PORTR-HANDS’ and held in Spring 2019, Don Mateo focused on the creation tiny papercut characters.

Why did you choose the name ‘Don Mateo’? Is there a story linked to this name?
I lived in Spain in 2006. The name Don Mateo is a reference to this period of my life.

What was your first experience with street art? What did you paint?
The very first time I painted something in the street happened when I was 12. I tagged a golden ‘fuck’ on my teacher’s car. That was stupid of me. Some years later, I carried out projects connected to the city. I remember painting a tank pink the day Mister Sarkozy became the new French President.

What inspires you when you create?
Nothing special to be honest. Art is a means of expression, I need it.

We can notice that most of your works focus on female characters (women and little girls) What is the reason for that?
I find poetry, sweetness and strength in women. Unfortunately, I can’t find those in men. Since time immemorial, painters have been inspired by women, for example Ingres, Manet… Surprisingly, I focus on male characters when I have dark thoughts, but in general those are ideas I quickly get rid of.

In 2013 you made a collage ‘Fuck You’ in Lyon. To whom is it addressed?
I painted a character giving a finger on a wall. I liked the contrast between the grace of the character and the rudeness of the finger. The gesture is just a symbol to express angriness and rebellion.

What are your future projects in years to come?
Paint again and again.

To finish, we heard the police arrested the JAB collective in Lyon (April 26), with more than a million euros of damage to pay according to French media. What is your reaction to this?
I don’t react to this…. I am not interested in this. This kept the local press busy for a couple of days. I would rather read articles on good local artists but never mind… 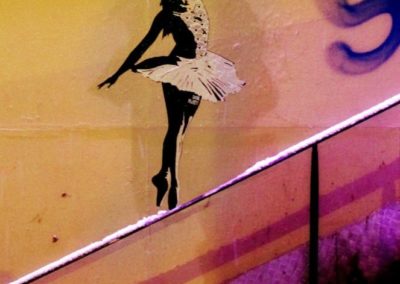 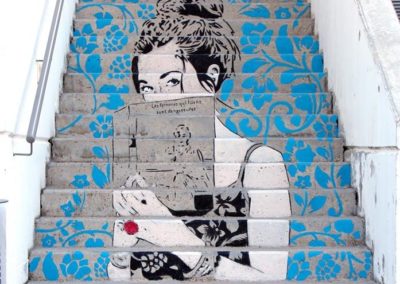 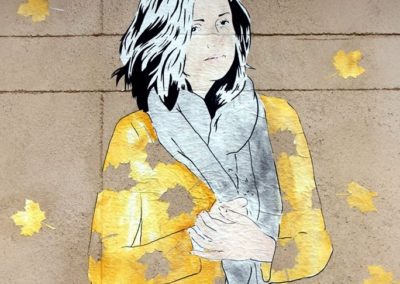 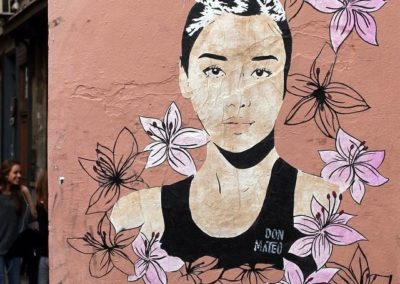 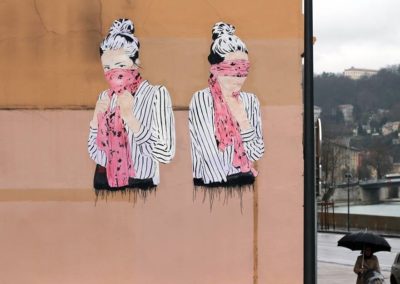 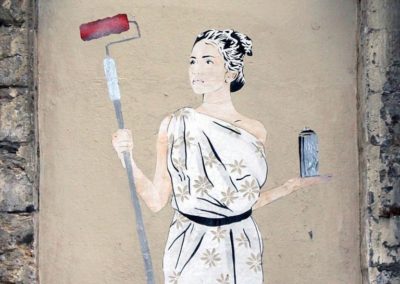 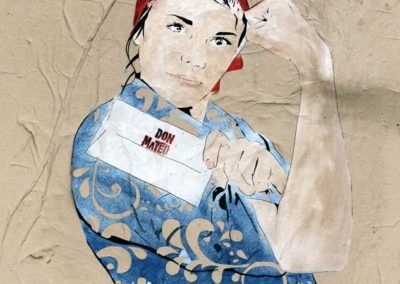 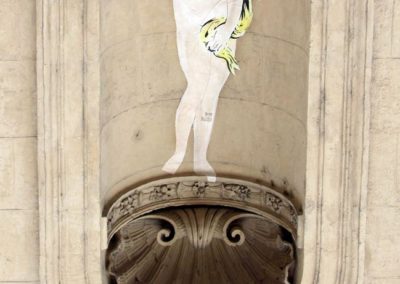 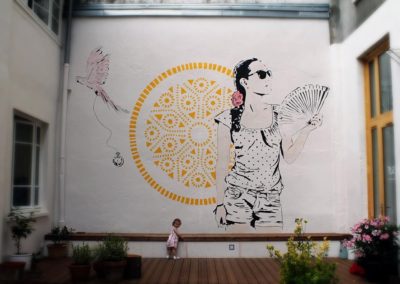 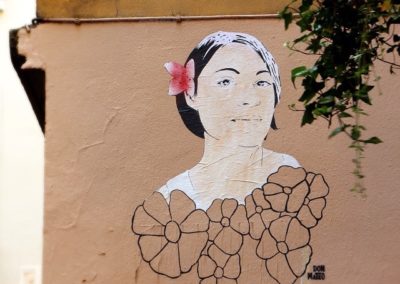 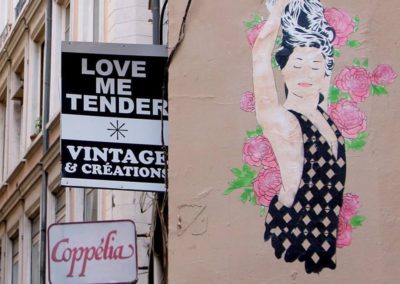