Who could have ever imagined that photography could be installed into streets? Well street artist JR did just the unimaginable by combining the two. Born in France on February 22, 1983, JR was just another average teenager with a passion for graffiti. He lived graffiti and truly enjoyed the movement. His graffiti moniker was Face 3. However, it was not until he found a camera on the subway that his perception on street art change. This allowed him to track the individuals who communicate messages via walls and street art. He quickly began to track people in the forbidden undergrounds and roofs of Paris, France. In 2004, street artist JR photographed the riots that broke out in the banlieues and created his first major project by pasting up large prints of their faces around the city.

JR owns the biggest art gallery in the world. He exhibits freely in the streets of the world and has always allowed the public to assist with his street artwork. He prefers to catch the attention of people who are not a part of the typical museum visitors. His work mixes Art and Act, talks about commitment, freedom, identity, and limit.

Currently, his most common method to create street art is through the use of wheat pasting and gigantic mono photographs. He often gets his subject models faces with a 28mm wide-angle lens which result in portraits that unguarded, funny, soulful, real, and that capture the spirits of individuals who normally go unseen. His work of art brings forward common everyday materials to the light. These blown-up images are then pasted on urban surfaces such as the sides of buildings, bridges, rooftops, and even trains. Not only do they confront the public audience, but they also help engage audiences where they least expect it. Often introducing those who are unfortunate in the world to the remaining population in the world.

In 2006, street artist JR achieved Portrait of a Generation, in the bourgeois districts of Paris. This illegal project became official when the Paris City Hall wrapped its building with JR’s photos. In 2007, he managed to defy expert’s predictions of failure and created the largest illegal exhibition ever. His street artwork was placed as huge portraits of Israelis and Palestinians face to face in a variety of Palestinian and Israeli cities. Not only that but he bravely engaged in illegal activity by bypassing authorities and securities on both sides of the separation wall in this location. This exhibition was widely known as Face 2 Face.

Over the years JR has constantly engaged his street artwork audience and has presented numerous exhibitions and projects to include, Women are Heroes, The Wrinkles of the City, and InsideOut. His work has touched thousands of city inhabitants and often displaying culture, history, and memory for a particular location. His work can be found worldwide, and he has touched cities such as Cartagena, Shanghai, and Los Angeles.

Street Artist JR creates pervasive art that spreads uninvited on the buildings of the slums in France, the walls in the Middle East, the broken bridges in African, and the favelas in Brazil. JR has traveled to distant and dangerous places many times. Not only does he infiltrate communities, but he also befriends inhabitants by recruiting them as models or collaborators.

This artist combines powerful social statements through large portraits and murals. In 2011, street artist JR won the TED Prize for his phenomenal work done worldwide. He is often compared to other politically charged art works. His artwork is just one simple wish to change the world one step at a time.

His latest projects took him to Tehachapi maximum security jail in California to meet and learn the stories of convicts, former incarcerated men, their family members, prison staff as well as survivors of violent crimes : and in New York City to capture the faces of those who make the city alive. 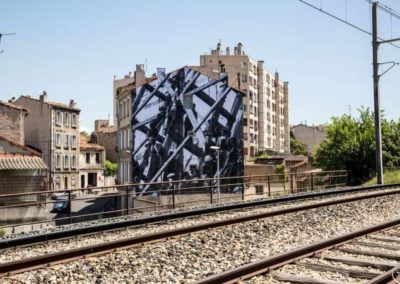 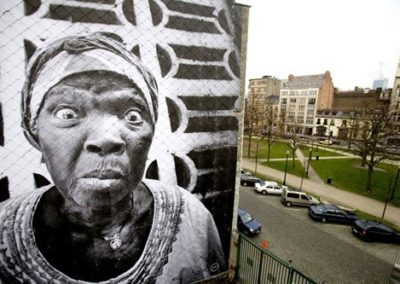 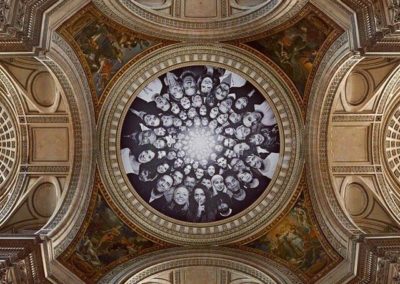 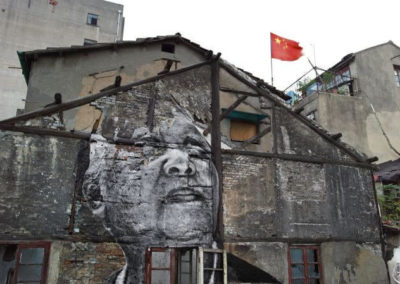 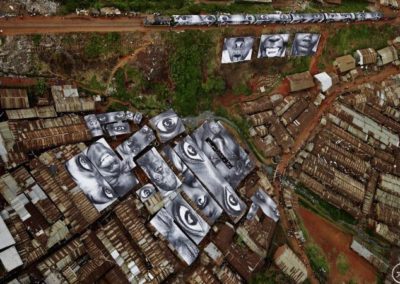 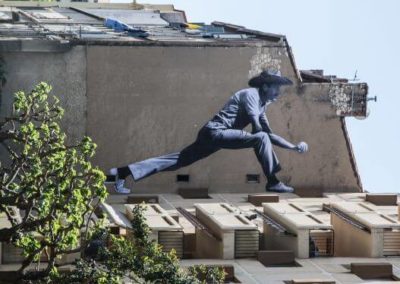 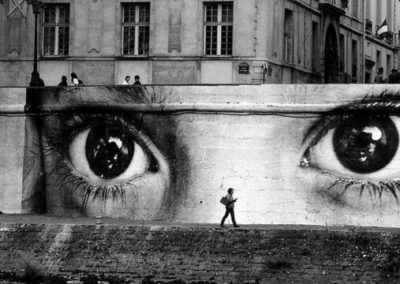 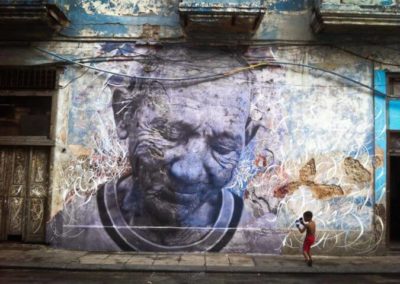 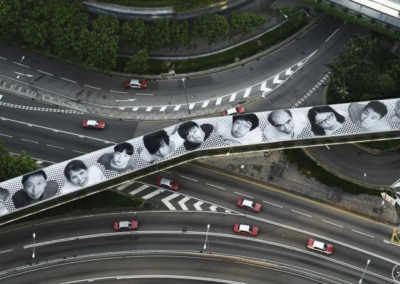 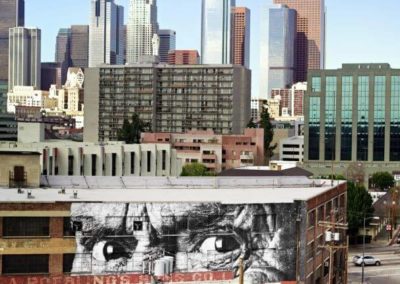 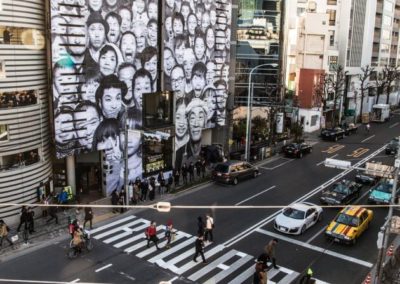 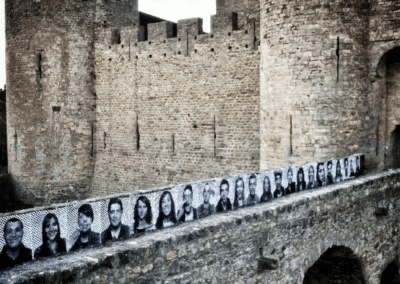 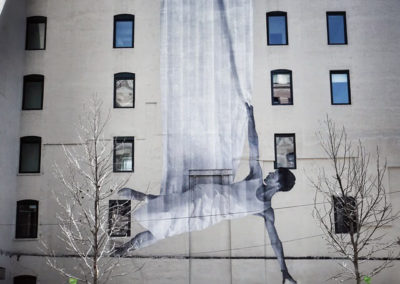 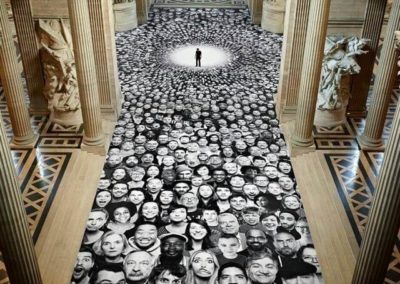 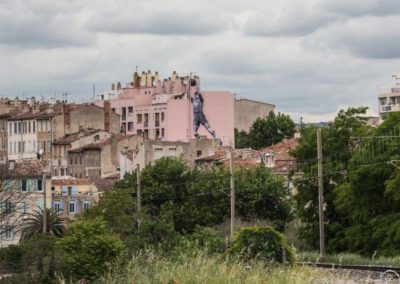 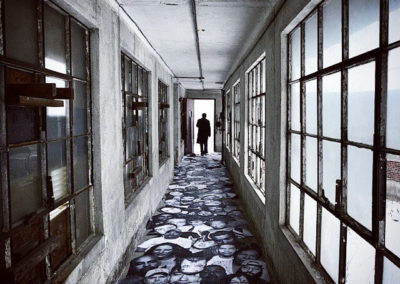 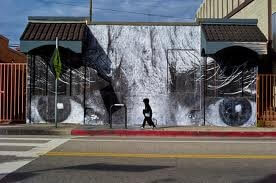 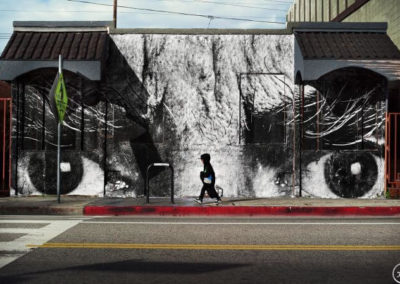 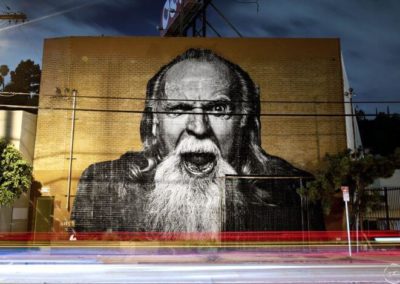