Ludo is a Parisian street artist who loves to create graphics and wheat pasting.  He is based in France, but his work has been seen in Paris, London, Berlin, New York, Chicago, Tokyo, Bangkok, Shanghai, Hong Kong and even in Vatican City. His street art includes a specialty of street poster art that can be applied into walls quickly and effectively as wheat paste. Like most street artists, it is very difficult to find any personal information about him.

Initially after studying sociology in Paris for three years, Ludo realized his potential in graphic designing. Not only was he more satisfied, but he also obtained money through freelance jobs. During his time in Milan, Ludo’s street activity was kept affluent and his learning process continued. Unfortunately, he did not have any major street art mentors at the time. Ludo states that he is interested in people and he is also interested in bringing a message to the street that can easily be understood. He enjoys collecting what he can from society and incorporating it into his work when he takes it out to the streets.

You may often see his work of art as an incredible sight. Most of his work primarily focuses on the combination of nature and human technology. More specifically, he prefers to emphasize on the way society takes nature for granted. Often, we disrespect and over-exploit it- leading human control into a vast destruction. His work focuses on our surroundings and effects all while providing a form of humility. This is the basis of his work and is sure to leave one amaze at first sight.

Ludo’s primarily forms of mediums used in street art are composed of silkscreen, acrylic, pencils, scalpel, tape, and printers. This is all used for wheat pasting or paste-ups. He also currently works on street installations and sculptures by re-using objects found within the streets. He is constantly active with works across Europe, using trademark monochromatic paste-ups with dripping green highlights that often merge technology with plants or insects. These images create a “new order of hybrid organisms.” He enjoys the idea of obtaining his very own color name someday.

The use of green shades is used as a simple method to gain recognition. It is a well-known mix that Ludo uses to convey his artwork, designs, and messages. Ludo’s shows have been exhibited across the world in cities such as London, Amsterdam, Zurich, Rome, Paris, San Francisco, New York, and Los Angeles. One of his most recent project took him to Berlin, Germany to create a large mural all around the Olympic Stadium.

Some of Ludo’s favorite street artists include Neckface, Bast, and Sweet Toof. 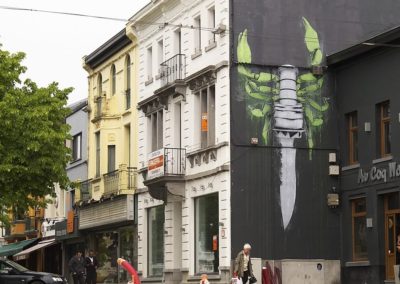 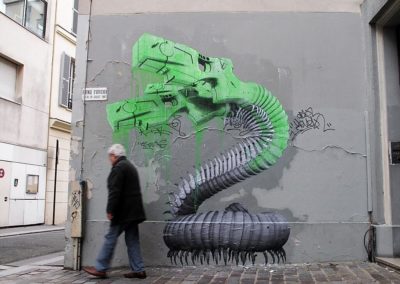 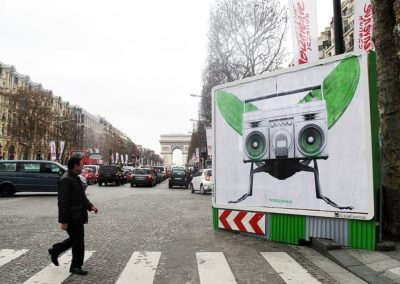 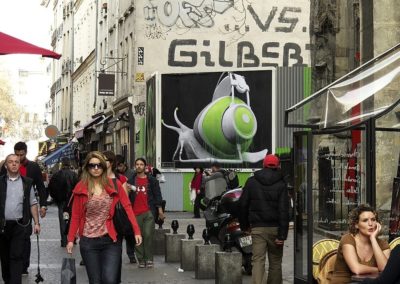 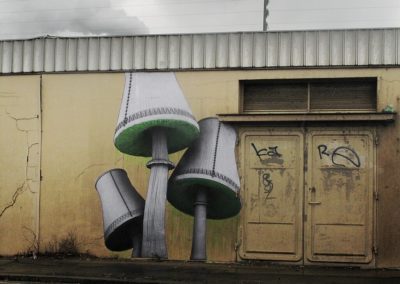 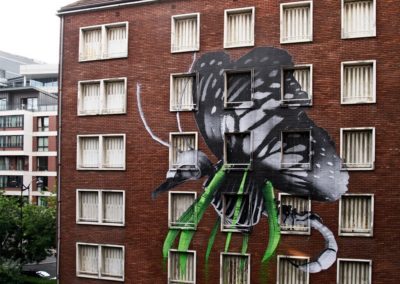 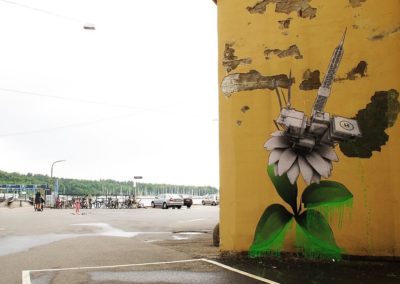 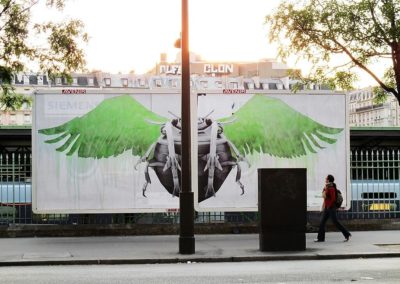 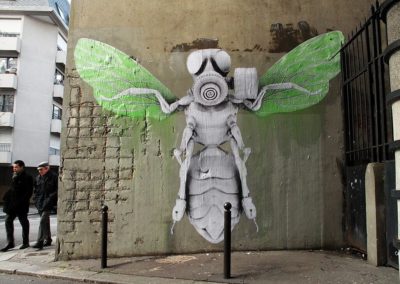 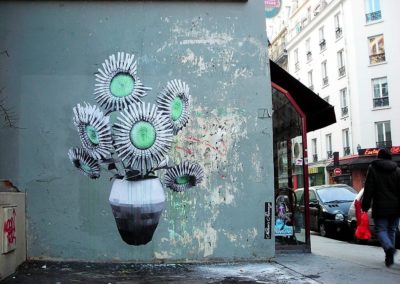 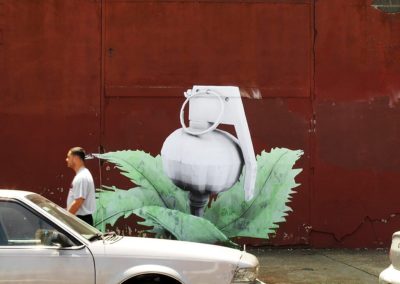 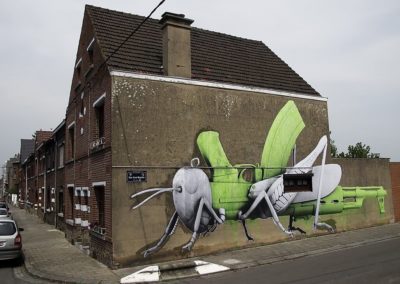 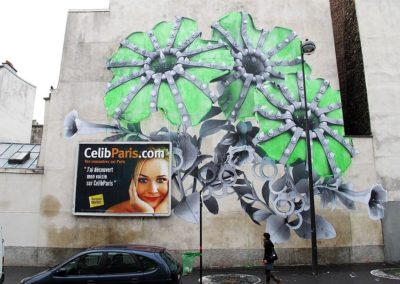 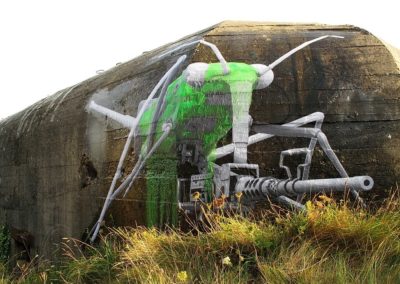 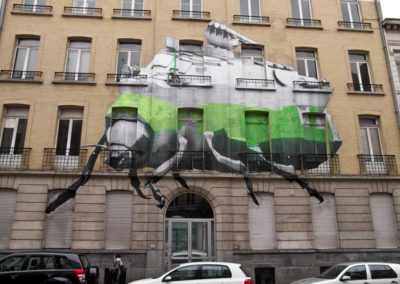 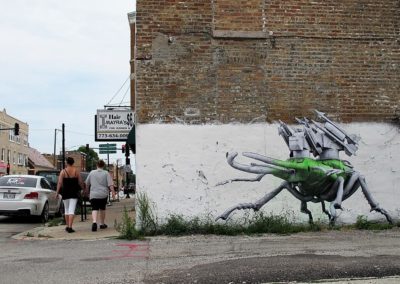 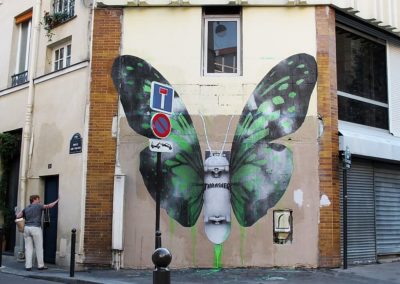 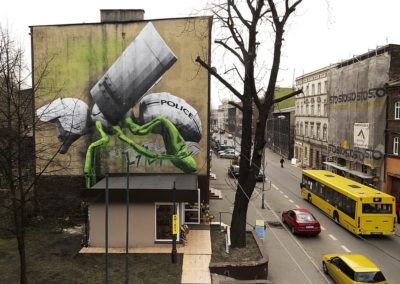 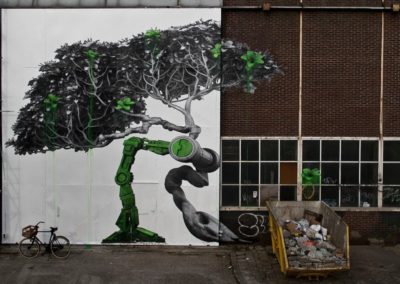 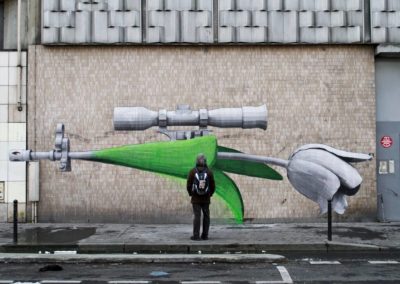