Who is Shepard Fairey?

Frank “Shepard Fairey” is a very famous graphic artist, muralist, and overall artist. He was born on February 15, 1970 in Charleston, South Carolina in the United States. In 1988, the artist graduated from Idyllwild Arts Academy in Palm Springs, California. He earned his Bachelor of Fine Arts from the Rhode Island School of Design in Providence, Rhode Island in 1992.

As a young adult, Shepard Fairey became very interested in art. He soon began to use his drawings in T-shirts and skateboards. He was a skateboard-obsessed art student. While in school, Shepard Fairey held a part-time job in a skateboarding shop. Soon after, he hit the skateboard community hard by pasting homemade stickers all over the place. It was then that he realized his desire and interest in the street art culture and graffiti movement. Another strong influence was his love for punk music, which he demonstrated stencils.

One of the first images he ever used was that of Andre the Giant. Shepard Fairey found this image in a newspaper ad and he chose to introduce it to the streets.

Shepard Fairey is one of the most influential street artists of our time. Shepard Fairey’s work has been used in screen-prints, stencils, stickers, masking film illustrations, wheat paste, collages, sculptures, posters, paintings, and murals. Shepard Fairey enjoys working with the colors black, white, and red. Fairey has constantly shifted between the realms of fine art, commercial art, street art, and even political art.

His most famous art includes images of Andre the Giant, the Obey trademark, as well as the propaganda poster of Barack Obama. In 2008 Shepard Fairey used the Obama image to design Time Magazine’s Person of the Year cover. In 2011 Time Magazine commissioned the artist for a second Person of the Year cover. His latest cover designing was in April 2020 for Rolling Stone with a portrait of Greta Thunberg.

Shepard Fairey is also famous for his activist and humanitarian concerns and often creates and donates artwork in order to promote awareness and show support. After the 2015 Paris attacks, the artist paid a tribute to the victims with the creation of a poster depicting Marianne, the French national icon, surrounded by the French motto Liberté, Egalité, Fraternité. In June 2016, Shepard Fairey reproduced the image as a mural in Paris. Fairey then offered the poster to French President Emmanuel Macron who hung it in his office. The artist also founded in 2007 the Obey Awareness Program, operated by Obey Clothing, so as so increase his humanitarian efforts. This program allows Fairey to support handpicked causes he believes in by selling specially designed merchandise and donating 100% of the profits raised. In the early 2000s, Fairey began donating to organizations like Chiapas Relief Fund or Feeding America.

Shepard Fairey’s work combines elements of graffiti, pop art, business art, and Marxist theory. His work has been seen in galleries around the world and even museums. Not only that, but is often recognized in graphic designing and signature apparel. One of his most famous works includes his portrait of Barack Obama. In fact, this portrait drew national attention to Fairey and his work quickly exploded after that recognition.  This poster also received the Brit Insurance Design of the Year Award in 2009.

Shepard Fairey has held numerous successful solo and group exhibitions across the world. The year 2019 was particularly marked by his solo show Facing the Giant : Three Decades of Dissent, a reflection on the last 30 years of the artist’s career, held in the cities of Grenoble, New York, Paris, Vancouver, London, Providence and Los Angeles. The selected works address recurring topics in the artist’s career such as self-empowerment, rebellion, abuse of power, environmental destruction, racism, gender inequality, xenophobia, campaign finance reform, the military-industrial complex, propaganda, war and peace, and economic imperialism. 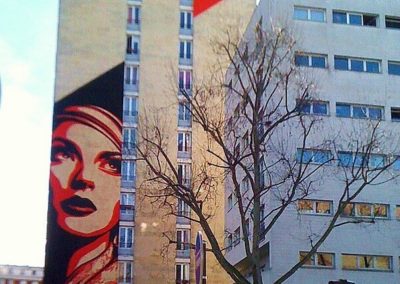 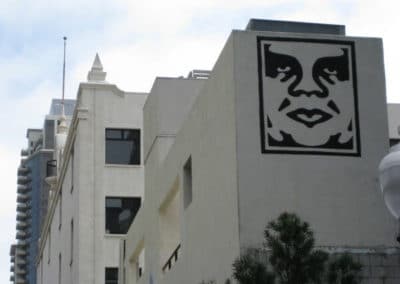 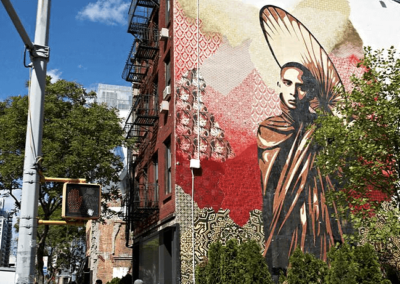 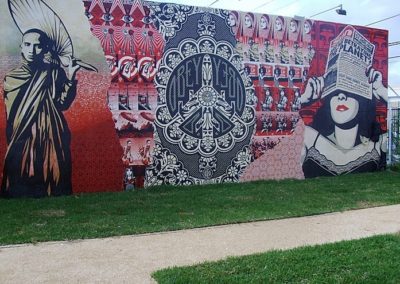 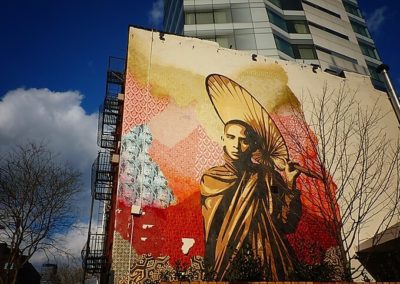 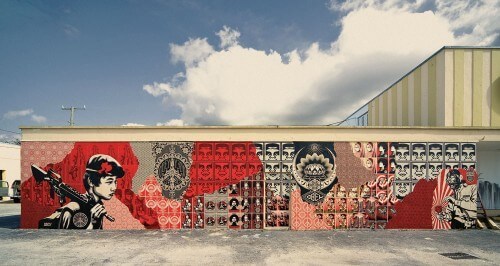 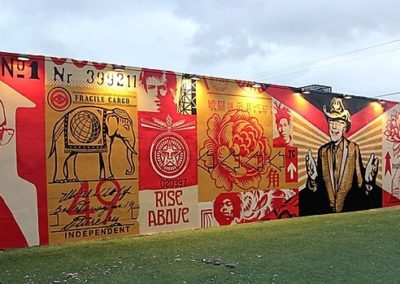 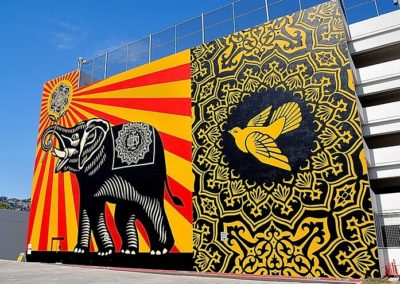