Tristan Eaton was born in Hollywood near Los Angeles, California in 1978. At the age of 8, his family decided to move to London, England. By the age of 16, they moved back to the United States but this time to the city of Detroit. Although Tristan Eaton loved Detroit, he had a big city heart and moved to New York at the age of 20.

Tristan Eaton pursued street art as a troubled teenager and during this time he painted everything from billboards, to dumpsters in the urban landscape. He lived and painted in London, Detroit, and New York. He is a self-proclaimed skateboarding punk who as a teenager was arrested for various crimes including shoplifting and tagging with graffiti.  During these times, art became his saving grace and it often allowed him to get off fault by providing artistic evidence to judges, principles, and other characters of authority.

Tristan Eaton designed his first toy for the Fisher Price at the young age of 18. Since then, he has become an entire icon in the designer toys world. Tristan Eaton is also recognized as a creative leader in the world of advertising; he regularly consults with brands such as Hasbro, Pepsi and Nike. One of his most successful projects includes the creation of Dunny, a designer based trading figure. This figure is 3 inches tall and made from Roto-Cast Soft Vinyl.

Tristan Eaton became involved in the Urban Toy scene by working with toy-production Kidrobotdesigner Paul Budnitz. At a very early stage, they worked together on an animated film where Paul Budnitz directed and Tristan Eaton art-directed. Kidrobot became so popular that they both stopped working on the film and became involved in the toy-production full-time. These toys were created on a limited edition and based on the work of significant graffiti artists and the hip-hop culture. He also believes that limited designer toys lie between fine art and consumerism since fine art is highly expensive, while consumerism is less expensive and available to masses.

Tristan Eaton has painted elaborate street art murals in many neighborhoods across the country. His goal is to bring art to those who are not always fortunate enough to have access. It is not fair for the lower class to only have access to gray buildings and billboards.

Some of Tristan Eaton’s artist influences include Os Gemeos, Mode 2, Takishi Murikami, and many more. School was also very important because there he developed amazing relationships with his teachers. He dreams on someday featuring an army of giant balloon elephants crashing the Macy’s parade.

Tristan Eaton’s work can be seen at the Cooper Hewitt Museum and in the permanent collection of the New York Museum of Modern Art (MOMA). He is currently the President and Creative Director of Thunderdog Studios INC, which is a prominent New York, based designer toy brand and creative agency. Thunderdog is a full-service design studio and toy production company based in Dumbo, Brooklyn. They focus on everything from toy design, illustration, graphic design, and animation.

Tristan Eaton is also acknowledged one of the most prominent street artists working today. Eaton’s large scale mural work features a meticulous patchwork collage of pop imagery mixed with his unique freehand personal style. Most of his murals were painted across the USA but some can also be found in France, Denmark, Germany, Sweden and Mexico. Eaton also participated in internationally renowned urban festivals like MURAL festival in Montreal in 2018 and Pow Wow Long Beach in California in 2015.

He also collaborated on a few pieces with his brother Matthew Eaton who is an abstract painter. Their common mural in honour of their late uncle Binda particularly marked the 2020 edition of the famous street art festival Pow Wow Hawaii. 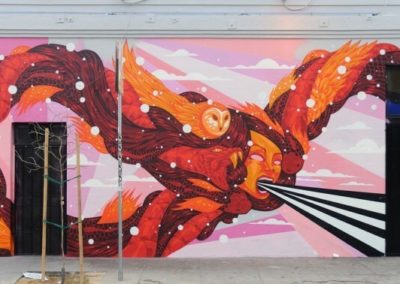 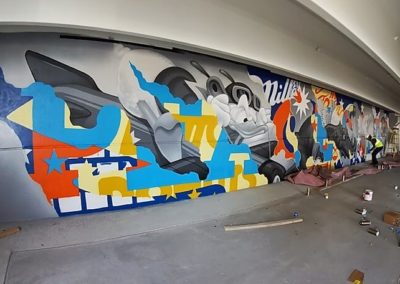 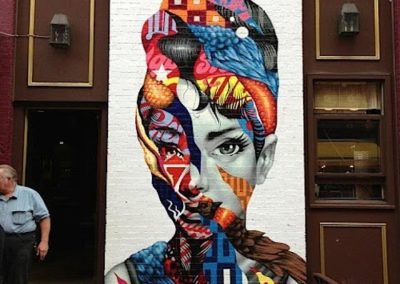 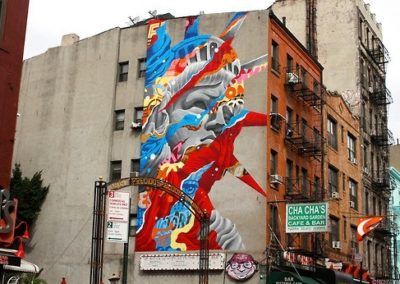 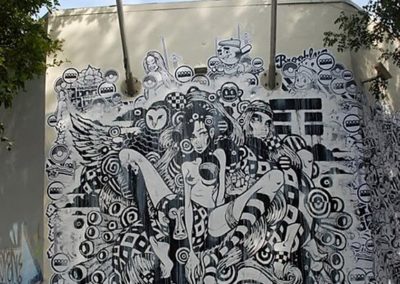 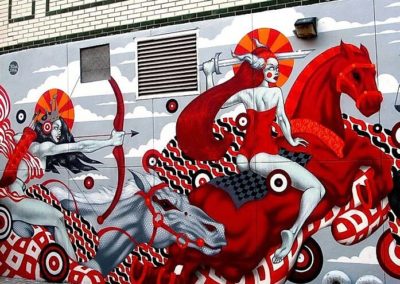 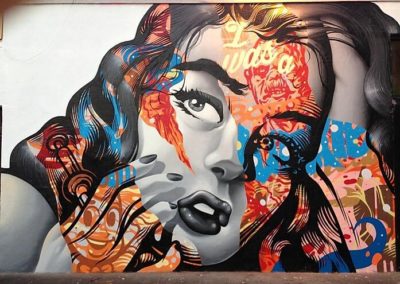 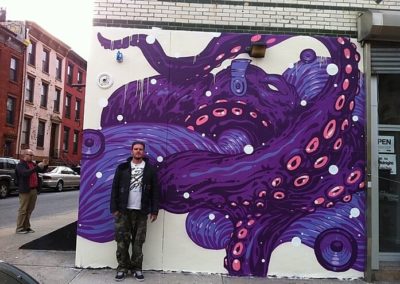 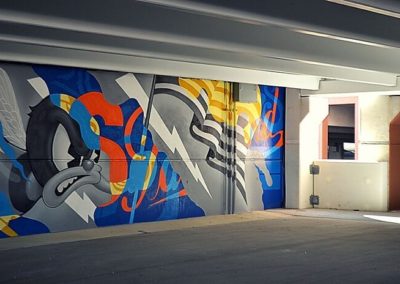