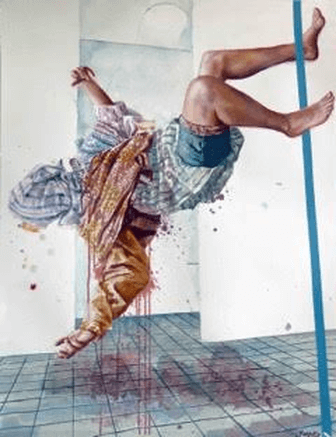 Stories from the Endless Suburbia
April 29 – June 3 2016
Via di San Salvatore in Campo 51, Rom​e​
Free entrance
“Everyone has a story worth telling. Be tolerant and understanding of others.”Fintan Magee

From April 29th to June 3rd Galleria Varsi – one of the youngest galleries that produce street culture in the capital – will host a solo exhibition by the Australian street artist Fintan Magee, “The Backwaters. Stories from the Endless Suburbia.” Internationally known for his large-scale murals in galleries and street art festivals around the world, including Indonesia, Colombia, Russia and the US, Magee harks back to a childhood era, inserting into his works characters from a marginalized urban context. Magee started his artistic career as a writer in the streets of Brisbane. Since then he has moved on to murals, the iconic style that has made him an internationally renowned artist. His large scale works, done on the walls of buildings in the outskirts of the cities mix surreal and figurative elements. The theme of the exhibition is the artist’s childhood memories of his native Australia, and tells the stories of the people living in the Nineties in its “cultural backwaters”. The show includes Magee’s works on paper, mixed media canvases and sketches, alongside a life-size plaster sculpture of child who accidentally falls off his bicycle, an element which recalls the artist and all viewers’ childhood. The artist narrates through the eyes of a child the outskirts of Brisbane, an isolated town inhabited by people of the most different and varied origins, Indians, Filipinos, Aboriginals, Italians, Maoris, Vietnamese, Greeks and Pakistanis who lived the streets of Brisbane, coexisting in a short radius of miles where their children grew up together.Magee sees his art as a tool to tell humorous stories, indirectly touching important social themes such as the impact of society on the environment, migration and social exclusion. By depicting abandoned objects and places and marginalized individuals, the artist carries the viewer in a tour of the suburbs of the world where tourist eyes never arrive.“I love painting in the street, because there art is integrated with daily life and it stimulates people to develop their opinion on art”, states Magee who before the exhibition will create a mural in the Roman suburb of Primavalle, in cooperation with the group Muracci Nostri.

Galleria Varsi is amongst the youngest galleries actually producing

street culture in the capital since 2013, always with an eye on the underground scene while continuing to receive the best artists of the moment. Located in the historic center of Rome, it opens its doors to contemporary and avant-garde artists for their solo exhibitions. Many of the artists (writers, street artists, illustrators, sculptors and photographers) mostly belong to street culture, whose innovation has consecrated the gallery as an original space in the panorama of Rome. The founder Massimo Scrocca declares that “Despite Galleria Varsi is still fairly recent, it has become internationally renowned thanks to our continuous collaboration with high level worldwide artists such as Etam Cru, Herakut, Dulk, Etnik, Run, Alice Pasquini, Nosego, M-City, Solo, Daniele Tozzi, Mr. Thoms, Jacopo Mandich, Diamond and the two sacred legends of the Eighties American graffiti scene, Blade and Skeme. From the beginning, the gallery has focused on the importance of communicating with other countries through its channels (website, online shop, social networks, etc.) and has become, especially for American tourists, a must stop during their visit to Rome”.

Born in Lismore NSW, Fintan Magee moved to Brisbane as a child and began drawing shortly after. In his early teens he was exposed to Brisbane’s graffiti culture and began painting on walls. Moving away from traditional graffiti in recent years, his large-scale murals often inhabit the isolated, abandoned and broken corners of the city. His paintings mix surreal and figurative imagery and are deeply integrated in an urban environment; they explore themes of waste, consumption, loss and transition and contain feelings and a softness influenced by children’s books. He has traveled extensively completing projects in Sydney, Melbourne, London, Vienna, Los Angeles, Miami, Atlanta, Bogota, Buenos Aires, Copenhagen, Moscow, New York, Oslo and Dublin. His diligence, technical skill and progressive approach to painting have solidified his reputation as one of the leading figures in Australia’s Street Art and Contemporary Mural movements.

WHERE: Galleria Varsi – Via di San Salvatore in Campo 51, Roma

WHEN: April 29 – June 3HOURS: Tuesday thru Saturday from noon to 8 pm, Sunday from 3 pm to 8 pm, monday closed