Pictures of The Artists Paint Jam – 7th and 8th May 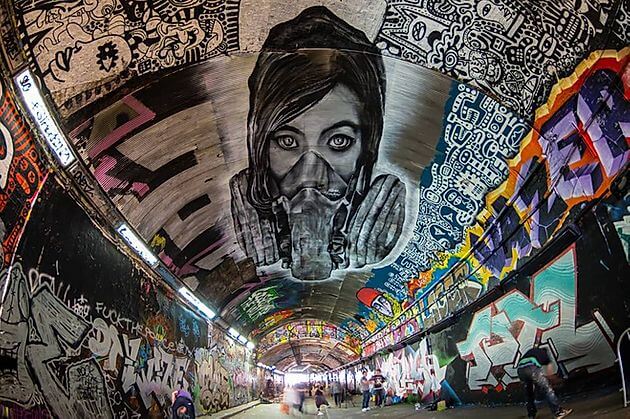 Last weekend a crowd of artists and art lovers gathered for the Artists Paint Jam, a graffiti festival which took place in Leake Street Tunnel in Central London.
Leake Street Tunnel, also known as the ‘Banksy Tunnel’ (for he painted there in 2008) is about 300 metres long under the tracks of Waterloo Station. This fascinating place was the stage of 2 days of unleashed creativity and fun among graffiti lovers.

On Saturday 7, the Artists Paint Jam ran simultaneously in Leake Street with Femme Fierce Festival, an all female event which generally took place on International Women’s Day and which returned this year in May and on a lesser scale. It was the third consecutive time that Femme Fierce was held.

Charlotte Ricco and Elodie Sylvain were also there for a vox pop about the place of women artists in public space. The two French girls based in Marseille are working on street art and gender issues. You can check their video (P)ose ta bombe on Youtube :
www.youtube.com/watch?time_continue=31&v=NklOwUlSb74

Here are the pictures from the Artists Paint Jam. Enjoy!

Big shout out to all the contributors and photographers (Stephen Ball, Charlotte Ricco, Jeremy Moseley, Keith Knowlton, and Artistreet)