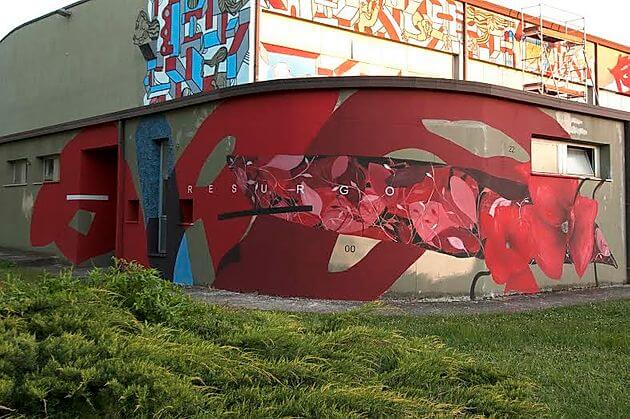 The ‘Prison Camp PG 59’  is a new project promoted by the association ‘Casa della Memoria- House of memory’ and the municipality of Servigliano, Italy. Starting from October 1943 the Prison Camp 59, became a point for Jews, Italian and foreigns from the province of Ascoli Piceno. Today CPG-59, thanks to an urban art project and through the expressive power of the murals, takes on new meaning: “Generative Field Painting 59”

The artist’s idea: ‘My works on wall are characterized by two main aspects: on the one hand the geometric and abstract shapes, and on the other hand some botanical elements. The synthesis of the signs is given by the meeting between the graphics and architecture,  two schools I attended and thanks to which I can now introduce a fundamental subject for the understanding of the job: the ‘Archigrafia’. For the job in ‘Prison Camp 59′ the flowers assumes a important role, in fact it’s the symbol of the days of memory.  The title “Post Fata Resurgo” represents the rebirth of a sad and dark space like a Jews camp.’