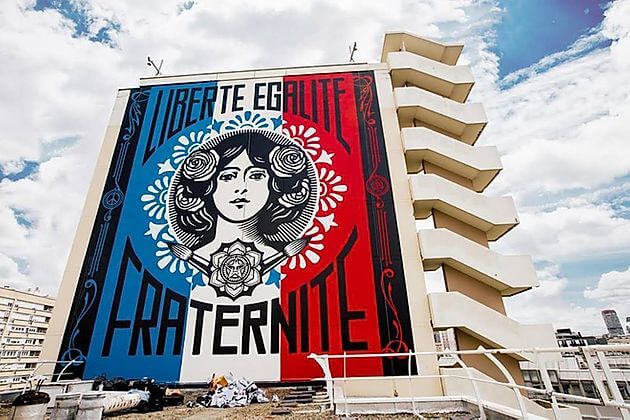 Shepard Fairey and his team are currently in Paris on the occasion of Earth Crisis solo show at Galerie Itinerrance (opened 24 June). Just before the opening, the team painted 3 murals in the 13th district of the French capital.

In solidarity with Parisians and all of humanity after the Paris attacks, they painted ‘Liberté, Egalité, Fraternité’ (Liberty, Equality, Fraternity) which is the national motto of the French Republic.

450 ‘Liberté, Égalité, Fraternité’ screen prints (18 inches by 24 inches, signed and numbered) are available at Galerie Itinerrance in Paris. Plus, a very small portion will be available for purchase on ObeyGiant.comin the store. All proceeds will go to benefit SOS RACISM.

“Liberté, Egalité, Fraternité piece, was really just about showing my support for Paris and for France after the terror attacks. The French flag was not always seen as a symbol that all French stood behind, kind of like the US flag. But in this moment, nations around the world are supporting France with their recreations of the flag on monuments. I think it’s a nice symbol for unity.
It’s time to be united in loving, not divided in fearful. I think the place for a street artist or any artist in this moment is to try to connect on a very human level. I think their creativity brings people together. I’ve always believed in street art because it means that the artist is participating, rather than just passively observing.”