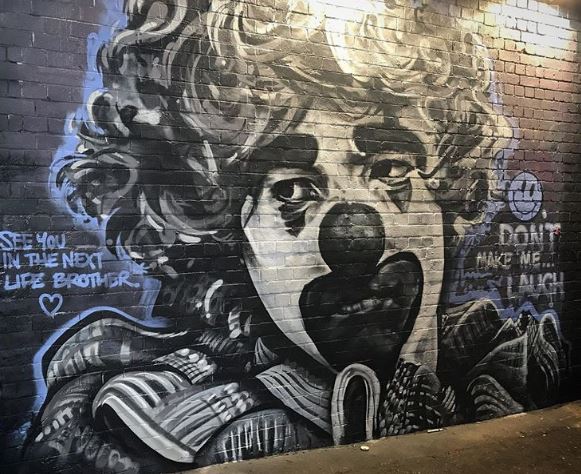 The streets of Birmingham have been the canvas of street artists for decades, but more recent festivals, including B-Side, City of Colours, and High-Vis have nurtured the city’s talent and attracted bigger names from around the world.

The Digbeth quarter is rich in colour and creative expression. This route takes you past some epic, sky-scraping murals and introduces you to some of Birmingham’s longest-standing artists.

The tour can be walked in under two hours, but as every nook and cranny is likely to reveal something new, we insist that you take your time, stop off at our suggested Refuel Points, and really get to know those graffiti hot spots.

Gent48 – A talented artist whose works resemble detailed oil paintings, and who has been on the Birmingham street art scene since the beginning.

Newso – An artist whose self-funded work has inspired the city to open up more street art spaces.

Title – One of Birmingham’s longest reigning graffiti kings, Title’s work goes back decades in the city.

Arrive into the Birmingham Moor Street Station area in the late morning.

Next, carry on down Bordesley Street, past your first piece by Spotlight Artist Philth Blake, to Meriden Street. Here, you’ll see an entire wall decorated with the work of Panda, part of the Graffitiartist group. Recently, Gent48 has added a Covid-19 themed charity artwork.

On your left is New Canal Street. The car park here has been taken over by a number of artists, but a monochrome design by Annatomix stands out.

Next up is Coventry Street, where you’ll find the first work by Dan Newso on this tour, a stunning HD portrait.

Head back towards Bordesley Street via Milk Street, as there are several pieces by lesser known artists under the arches here that are worth stopping for.

Refuel Point: The Ruin
Part of the original Digbeth Dozen, The Ruin is a pub with a menu and aesthetic inspired by the ruin bars of Budapest. Out the back, Andrew Mills, otherwise known as Title, painted a map mural that features 37 bars and restaurants in Digbeth. Stop here for Hungarian feasts and an arty atmosphere. Across the road, you can see the Wolf Man, painted by Panda and Justin Sola.

After lunch, your first stop is Floodgate Street. An early canvas of Gent48, his work smatters these walls. See a collaboration between Gent48, Newso, and Ziner. Another fox by Annatomix and incredible portraits by Justin Sola brighten up the arches between Floodgate and Gibb Street. But possibly the most prominent mural on this street is the J.F.Kennedy mosaic mural. First painted in 1968 by Kenneth Budd, and commissioned by the city’s Irish community, it was partly destroyed in 2007. In 2013, Budd’s son painted a replica.

Just off Floodgate Street is the Custard Factory. This area is teaming with art from the likes of Dan Kitchener and Philth. Seek out a figure painted by the Italian artist 0707, the ironic art of art_srx, a clown tribute by Wingy to his friend, and Title’s iconic Bohemian from Balsall Heath dedication to Odeon.

Refuel Point: The Old Crown or Dropshot
The Old Crown pub might tempt you for a quick drink. Out the back, you can see a piece commissioned by the pub owner; a signature fox by Annatomix.

Dropshot Digbeth is a ping pong bar decorated inside with fun murals by Title, including a ping-pong-playing Geisha.

Set off again in the direction Gibb Street. Here you’ll find the Graffitiartist.com shop, run by Panda, which supplies many of the city’s artists, as well as two stunning portraits by Philth. The car park here features middle-eastern inspired work by N4T4 and a huge blue monkey by Jay Sharples.

Lower Trinity Street is home to a colourfully geometric horseback rider by the Made You Look Collective, as well as a photorealist portrait of Muhammad Ali by French artist Akse. Belarusian artist Julia Yubaba has made her mark, as has Justsoap, with his octopus on the carpark walls. Spot another portrait by Justin Sola while you’re here too.

Briefly turn into Heath Mill Lane car park next to see murals by the likes of kid30shrunkenheads.

Next up is Adderley Street, the sketchbook of Brokenfingaz, a distinctive collective from Israel whose work seems to mimic the billboard adverts of decades past. Another Belarusian artist, Keydetail, has crafted a larger-than-life mural here.

Refuel Point: Dead Wax Digbeth
Dead Wax Digbeth screams ‘street art destination’ as soon as you see it. Its walls have been taken over by a Gent48 mural, and the interior plays host to works by Lisk Bot, Philth, and Foka Wolf.

Walk up High Street Deritend, stopping off at the car park to see the tiger painted by Graffoflarge. This artist’s work combines camouflage with graffiti, to create striking, colourful patterns that merge with their background.

Turn off onto Bradford Street to get a taste of Foka Wolf’s style: mixing together recognisable slogans and mocking big corporations. You will also find some of Lisk Bot’s characteristic robots.

Rea Street is home to one of the city’s largest and most impressive pieces: a Black Sabbath mural painted by N4T4 and Wingy as part of the 2019 High-Vis Festival, to mark the band’s connection to the city.

Turn left at the top of Bradford Street and follow the road around to Dudley Street. Here, you’ll see Annatomix’s depiction of David Bowie as seen in the ‘Lazarus’ music video. This artwork is on its third version, as fans regularly break off and keep chunks of it.

This tour ends in Smallbrook Queensway, just a short walk from New Street Station. An insight into more of the city’s international heritage, a mural here by Gent48 and Ziner explores the Chinese identity in Birmingham.