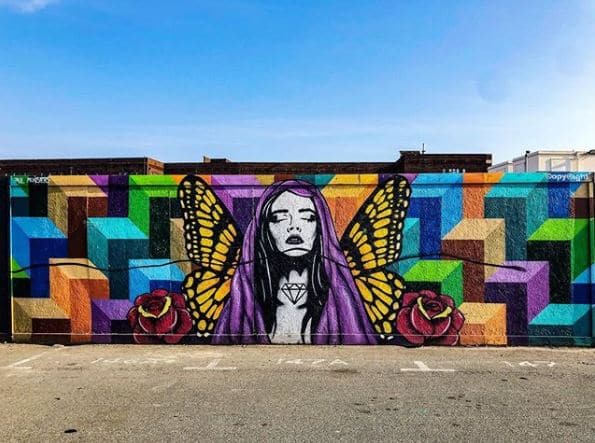 A hub for UK street art, Bristol’s reputation has spread worldwide. Renowned street artists from across the globe have now made their mark on the colourful streets. Banksy, Cosmo Sarson, Pixel Pancho, Nick Walker, and Aryz have claimed their space; so, with new pieces popping up all the time, every corner could lead to a new discovery.

Capturing every urban masterpiece in the city would be a never-ending task, as events such as Upfest see the artwork refreshed and reinvented every year.

Our street art walking tour focuses on the highlights and showcases the immense variety of talent that has painted the Bristolian canvas.
The tour itself can be walked in under three hours, but take your time, stop off at our recommended Refuel Points, and enjoy the visual journey.

Inkie – A Clifton-born artist known for his blend of styles and inspiration, including Mayan Architecture, William Morris, and Islamic Geometry

Cheo – One of Bristol’s earliest street artists, who includes his trademark bee in all his works

Cheba – Known for his characters and now his cosmic nebula paintings

Most journeys into Bristol begin at Temple Meads Station. Take your time to appreciate the area before you move on, as it’s quickly becoming a new favourite with street artists. Just beside the station, a collaboration between Copyright and Paul Monsters takes a bold, geometric form. Works by Voyder, Loch Ness, SP Zero, Kid Crayon, and Lokey are dotted around.

Head towards the Bristol Harbourside next, crossing over onto Spike Island to see Banksy’s Grim Reaper in the M Shed Museum, which was first painted onto the side of the Thekla boat. Girl with a Pierced Eardrum appears by the Harbourside Walk.

Continue south into Bedminster and see the artwork produced as part of Upfest, the largest Street Art festival in Europe, start to crop up. The mesmerising colours of Dan Kitchener’s rainy street scene can be found at The Pantile off West Street.

Walk up North Street, the centre of Upfest, taking in the artwork as you go, and turn off for The Nursery. Here, a towering portrait by Jody Thomas takes over the wall. Further up the street, The Bristol Beer Factory is home to a piece by Cheo, one of the early Bristol street artists, who attended the Barton Hill Youth Club with Banksy, Inkie, and Jody. Opposite the Factory is a sign of Bristol’s international appeal: Kobra, a Brazilian artist who specialises in colourful portraits of iconic figures, painted John Lennon here at Upfest 2017. Spot works by artists such as PichiAvo and Findac nearby.

The clouds have parted, the sun is out, the artists are going for gold up on the scaffolding and we are LIVE @upfest ☀️👍 The @bbftaproom is open all day with your favourite sessionable beers on tap. . . . #bbf #tasteofindependence #paleale #taproom #craftbeer #artemisseries #bristolbeer #bristolbeerfactory

Head on to Ashton Gate, opposite the Greville Smyth Park, to see works by the likes of Mr Council and Inkie, another Bristol legend who emerged in the 80s.

Carry on towards the heart of the city.

Refuel Point: Spike Island
This artists’ workspace is also home to a café-bar, cinema, and events venue that lets you take a break in the heart of the action.

Head back over Spike Island towards Cabot Tower and Bristol Cathedral, to St George’s Road. A relatively new piece by Nick Walker adorns a shop shutter, if you’re lucky enough to see it down.

Park Street might well be Bristol’s best-known address; at the top, Inkie and Cheba have confirmed its fame with a colourful sign opposite the Bristol Museum & Art Gallery, where Banksy held his 2009 gallery event. He famously paid just £1 to hire the venue, and Paint-Pot Angel still remains inside.

I saw a couple of Quantity Surveyors with theodolites skulking around beneath my @thefloristbristol wall the other day so building work may start soon… January can be a tough month for many, keep your head down and the skies will eventually clear, physically and mentally. • • A beautiful capture by @juanmariverocornejo • • #Jodyart #jodybristol #jodyartist #art #bristol #bristolart #bristolstreetart #streetart #bristolgraffiti #aerosolart #interiordesign #graffitiart #parkstreet #theflorist

Head onto Frogmore Street to see Banksy’s Well-Hung Lover. This street is home to eye-catching pieces by JPS, a stencil artist from Weston Super-Mare who takes his inspiration from Banksy. Spartacus stands next door to The Queenshilling nightclub.

North of Frogmore Street is Park Row, the home of Banksy’s Police Sniper. Then, continue on to Broad Street, where you’ll find an impressionistic piece by Irish artist Conor Harrington.

‘Vanguard | Bristol Street Art: The Evolution of a Global Movement’ @vanguardstreetart An exhibition celebrating the international Street Art movement is set to open at M Shed museum this summer and will showcase the instrumental role of Bristol’s creatives in the development of British Street Art. Seminal works from Henry Chalfant, Banksy and Beezer will feature, through to deep fake viral sensation Bill Posters, and Conor Harrington. A selection of the works on display have not previously been seen and some not shown in public for over twenty years. There’ll be a spotlight feature on artist, musician and activist Robert Del Naja (3D), Bristol’s earliest street artist. Vanguard will address the development of the movement from the subcultural perspective of one of the UK’s most diverse and dynamic cities, Bristol. Through an extraordinary visual narrative, the exhibition will explore the triumphs and hardships of Street Art’s anarchist origins in the 80’s and 90’s, the explosion of works in the early 00’s to ‘Then and Now’ – a selection of Bristol artists stylistic development over the last three decades, namely Nick Walker, Dicy, Paris, Mr Jago, Dale ‘Vermin’ Marshall, China Mike, Xenz, Will Barras, Rowdy, Jody, Cheo, Banksy, Inkie, and Ekoe. Vanguard has been curated by a collective of artists, specialists and collectors involved with the global street art movement. The team is headed up by Street Art specialist and Vanguard Project Director Mary McCarthy, who has worked within this field for the past twenty years. M Shed, Bristol, Saturday 6 June 2020 – Sunday 1st November 2020, Admission (£6 adult / £5 concession / Under 18s free) Tickets are on sale now at bristolmuseums.org.uk

Skirt just south of Nelson Street onto All Saints’ Street, where the Italian artist Pixel Pancho has turned the NCP into a work of art with his mechanical mythical beast.

Nelson Street itself is home to a host of unique pieces by international as well as local artists. The See No Evil Festival saw pieces by El Mac and the Spanish artist Aryz arise. Nick Walker’s The Vandal and one of Stik’s signature simplistic characters can be found here too.

Head north for around 10 minutes, past The Bearpit, until you come to Hillgrove Street. Here you can see an ongoing turf war between the artist Phlegm and the MM13 Crew. Today, the MM13 Crew’s colourful wave covers Phlegm’s original work, but featuring a character that Phlegm later added.

Stokes Croft is the climactic end to this tour, known for the constant battle waged here between its artists and the authorities. The artistic scene here is always changing, always colourful, and often challenging. On the side of Hamilton House, Cosmo Sarson’s sadly obscured, but once-stunning Breakdancing Jesus stands opposite a piece by Banksy. We Are Europe’s controversial image of Trump and Boris Johnson cropped up here in response to the EU referendum. A vast portrait by Stinkfish, added to by Deamze, was painted in 2012, and one of Cheba’s nebulous star-scapes coats the Full Moon Hostel and attic bar. From the Jamaica Street Junction, you catch the best view of Banksy’s Mild, Mild West, voted one of Bristol’s most iconic sights.

It breaks my heart that someone has ruin a beautiful masterpiece. This photo is an old one. Someone decided to cover this classic image in blue ink 😢. This painting will not be restored but replaced. What a loss to our community!! #jesus #jesusbreakdance #christian #catholic #breakdancingjesus #cosmo_sarson #streetart #graffiti #urbanart #bristol #christianinuk #christianinbristol #cliftondiocese #elimchurch #cityroadbaptistchurch #stbonsbristol

Throw back from many moons ago, painting the side of the Full Moon in #Bristol. 🌚✨ #cheba #bristol #graffiti #streetart