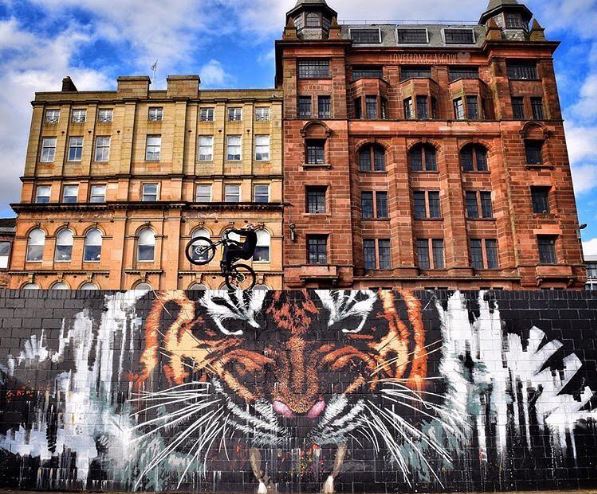 Glasgow street art has its own, very distinct style. Its home-grown street artists, as well as some international names, have turned the city into a gallery of colourful photo-realist portraits. Famous faces, as well as emotive unknowns, look down on you as you navigate this tour.

Keep your eyes peeled for any art not mentioned in this tour, as new masterpieces crop up almost daily, many organised by the Art Pistols group.

This walking tour focuses around the centre of the city, but feel free to head further afield to seek out new names, quirky characters, and more incredible portraits.

Spend 3 hours following the route without stopping, or stop off at our Refuel Points to make the tour last the day.

Smug – An Australian-born artist, real name Sam Bates, who works exclusively with spray paint to produce photo-realistic images. Keep an eye out for his incredible portraits.

Rogue – Hailing from Glasgow, an artist who has been on the scene for many years, whose spray paint stencil and character work has become well-known in the city.

Klingatron – ‘Glasgow’s Banksy,’ otherwise known as James Klinge, produces stunning stencil art of everything from cityscapes to portraits to tigers.

Stormi Mills – An Australian artist whose signature Lost Giants can now be found across the globe.

Ejek – One of the city’s leading graffiti artists, whose hyperrealist works sometimes have satirical undertones.

Begin your Glasgow street art tour at the High Street Station in the mid-morning, right in the heart of the action. Walk north along the High Street to the famous No. 287. The incredible detail of Saint Mungo and his hyperrealist robin, painted by Smug, takes over the building’s side.

Cut down onto Ingram Street to see British wildlife, including squirrels and foxes, painted by Smug, emerging from the stone walls of the car park.

On Wilson Street, Guido Van Helten, in collaboration with Art Pistol, marked the 2014 Commonwealth Games with a Badminton mural.

Cut down New Wynd, to see the colourful vision of Ali Wyllie and Recoat’s Spaceman mural.

On Osborne Street, one of Rogue’s 3 replica portraits dedicated to Billy Connolly brightens up the wall of a block of flats.

Head East across Saltmarket towards St Andrew’s in the Square, where you’ll find the second piece in Klingatron’s A Study of a Woman in Black series. The first and third of this series appear later in the tour.

Walk back across Saltmarket, and spot Klingatron’s cityscape if you can, and you’ll come to Bridgegate, where you’ll find the first in the Study of a Woman in Black series.

Running along the river’s north bank is Clyde Street: a stunning and familiar sight in Glasgow. Rogue’s artwork View of the Clyde reimagines the scene, with elephants diving beneath the river’s surface.

Back into the maze of city streets and you’ll find Howard Street and Dunlop Street, where exotic birds sit alongside caged birds as part of Rogue’s Big Birds series.

Your next stop is Stockwell Street, where Rogue and Ejek’s murals of famous faces surround the Clutha Bar. Smug’s portrait of Charles Rennie, a well-known Glaswegian face, sits about the bar itself.

Refuel Point: Clutha and Victoria Bar
Stop off at the Clutha Bar for a pizza and a drink.

Start the afternoon with Dixon Street, where you’ll see Dr Connelly… I presume? Another portrait by Rogue.

Cut back down onto the waterfront to Custom House Quay and, opposite the Clyde Walkway, you’ll see the famous Glasgow Tiger by Klingatron, originally painted to replace an iconic design that had weathered over time.

Continue your detour along Broomielaw to Kingston Bridge. Here, one of Smug’s earliest works: the Swimmer, painted to commemorate the 2014 Commonwealth Games.

Working your way back north, step onto Brown Street to see a monument to the diverse Glasgow skyline by the Cobolt Collective. This piece marked 30 years of the Glasgow Doors Open Days Festival.

Refuel Point: Sloans
Sloans is the perfect spot to enjoy the artwork of Argyle Street. Is also happens to be the oldest bar and restaurant in Glasgow, and first opened in 1797.

Back into the maze of city streets, and you’ll find Mitchell Street. Showcasing the impressive realist skills of Glasgow’s artists, Mitchell Street is a real gem. Check out Rogue’s World’s Most Economic Taxi, Smug’s Honey I Shrunk the Kids, and Wind Power, another piece by Rogue.

Springfield Court will introduce you to the satirical style of Conzo and Globel, who produced this mural of a gold Freddo alongside Art Pistol.

Head further East to the pretty Royal Exchange Square for the final instalment in Klingatron’s Study of a Woman in Black series.

As you head further north, wander down Gordon Street to see Klingatron’s Panda, and then Renfield Lane for a mural of two girls blowing bubbles by Rogue.

Argyle Street has become something of an open-air gallery for Smug, who has turned one stretch into the so-called Argyle Street Café, where tropical animals seem to be enjoying coffee inside. Further along, you’ll see Smug’s unique takes on famous paintings, including the Mona Lisa and Van Gogh’s Starry Night.

You might choose to finish your tour at the next stop, Charing Cross, because of the easy transport routes. But make sure you see Klingatron’s crocodile, and the vibrant birds by Little Book Transfers that form part of their STALK series.

If you choose to continue, the final leg of the tour requires a bit more walking. Less than ten minutes across the train line and you’ll reach Sauchiehall Street, where you can see the Crazy Cat Lady, painted by Rogue.

Refuel Point: Café Saramago
On the rooftop of the Glasgow Centre for Contemporary Arts, this is a great viewpoint for taking in the skyline… and possibly a few exhibitions on your way up.

Then, head up to the Cowcaddens Underpass in the north of the city centre to complete the tour with the renowned Hand Shadow Puppets, painted by Rogue.

From here, a short walk will bring you to Glasgow Queen Street Station.