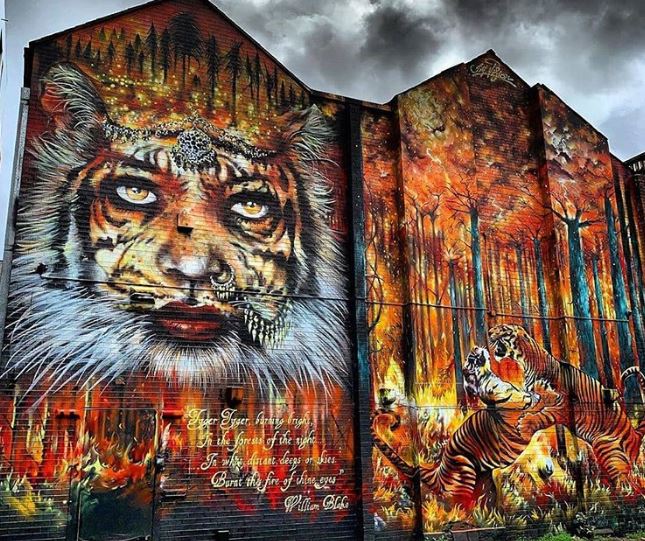 The Northern Quarter of Manchester is where the street art talent has really developed. The Cities of Hope group helps rejuvenate these cityscapes with important, hard-hitting themes. Commissioned artists bring them to life in unique, visual masterpieces. As a result, the street art in Manchester reflects the personal struggles, failures, and successes, of Mancunians and citizens of the world alike.

The scale of these artworks makes them hard to miss, so follow our suggested winding route towards the city centre, stopping every time something catches your eye.

The walk can be completed in just a couple of hours, so consider hanging around in Manchester afterwards and visiting those artworks that lie slightly further afield.

Axel Void – A creator of striking portraits that explore social injustices and personal struggles. His messages overlay his images in a signature font.

Akse – A French-born artist whose unmistakable photo-realistic portraits are dotted around the city.

Lemn Sissay – Though none of Sissay’s works are individually highlighted on this tour, look out for his tiled poetry on the floor as you walk. You’ll know it when you see it!

Faunagraphic – An artist who hopes to spread the love of nature through her colourful work.

Begin on Oldham Road. Spanish artist Axel Void was given the theme of ‘existentialism’ by the Cities of Hope group to produce this haunting mural of a girl being forced to smile: Sisyphus.

Next, head down to Cable Street, where Case’s vivid mural addresses mental health difficulties. It was originally painted for the charity Back on Track. A sky-scraping mural by Phlegm depicts an intricate city inside a glass bottle.

Copperas Street was home to three of Manchester’s portraits by Akse. You could see Arya Stark, Liam Gallagher, and Eleven from Stranger Things on the walls here. But now, only Eleven’s intense stare remains.

Continue your loop around these tightly-knit streets, stopping off to see the incredible detail of Jim Vision’s Tyger on Thomas Street. This mural comes in two parts: one a large portrait, the second a scene with two tigers fighting. It was painted to cover an earlier work by Vision to promote Netflix’s Our Planet series.

Refuel Point: Common
It may be early in the tour for a refuel, but Common’s arty vibe and gallery space make it a worthwhile place to pop in.

Emerge from Brightwell Walk onto Tib Street. Two works by Akse are here: Prince and Tony Wilson. The latter is a firm favourite with local residents.

The mural on Oldham Street will instantly grab you. On the side of the Koffee Pot building, 22 bees to commemorate those who died in the Manchester bombings, painted by Qubek.

Cut down Warwick Street, stopping to see C215’s moving portraits on your way, onto Spear Street. Look up: Two Worlds, by Dale Grimshaw. On the theme of ‘globalisation’ for Cities of Hope, Grimshaw explored its effect on indigenous people with this bright, eye-catching portrait.

The busy Great Ancoats Street has treasures of its own. Artist Faith47 uses her work to explore and expose different forms of intimacy and human vulnerability. In her mural here she focuses in on gay rights.

Back across the Ring Road is Port Street. Stop here to see the work of the all-female Nomad Clan. This mural addresses the pressures of masculinity and highlight male suicide. In the car park, you can see Chekos’ portrait of David Lynch, entitled Lost Border. Pichiavo’s mural of Hercules blends classical and urban styles under the Cities of Hope theme of ‘conflict.’

Next up: Newton Street. The artist Faunagraphic gets her inspiration from nature, and this mural of a blue tit turns a common garden bird into something remarkable.

Quiet Faraday Street will introduce you to another of Manchester’s bird-themed murals; this time, 10 Birds by Mateus Bailon. A more conceptual piece is Martin Whatson’s Tree of Tags.

Circle up around Stevenson Square and you’ll find a host of interesting pieces. Lowdown’s Silence is Golden merges religious imagery with graffiti elements as part of the Out House Community Street Art Project. A portrait of David Bowie by Akse has recently been lost, but instead, see his recent portrait of George Floyd.

Refuel Point: Nexus Art Café or Soup Kitchen
Nexus Art Café is a space for creatives. There is always something arty going on. Soup Kitchen regularly hosts everything from cinema nights to art exhibitions, making this warehouse venue the perfect stop-off en-route.

Begin the afternoon in Tariff Street. C215 has produced another mural here alongside Cities of Hope. His portraits in the city are based on photographs of homeless people taken by Lee Jeffries. The Nevercrew mural here, of stickmen trying to climb a huge quartz rock, is inspired by the journeys of refugees coming over to the UK. Ema adds some abstract relief here. Her long mural, inspired by molecular shapes, brings more light-hearted colour.

Follow the direction of the Rochdale Canal until you reach Richmond Street, home to The Molly House. On the side, the Nomad Clan have painted a tribute to the city’s gay icons, including Alan Turing and Anna Phylactic.

One street along from The Molly House is Canal Street. Here, Akse has turned his hand to a portrait of Ariana Grande, to thank her for her efforts following the Manchester Arena bombings.

Follow the canal further south and cross at Oxford Road. Seek out the arches of New Wakefield. Until 2012, this was the location for the Eurocultured celebration of European music, theatre, and art. Though the festival no longer runs, many of the artworks still remain.

Head back over the water, and follow the main road round to Deansgate. Spot the portrait of Amy Winehouse, painted by an unknown artist.

Refuel Point: Black Sheep Coffee & Cocktails
In Picadilly Place, Black Sheep is a relaxed venue with a cutting-edge feel and lots of art. Note that Black Sheep only opens on weekdays!

The final stop on this tour ties up neatly with its first. On the side of the People’s History Museum, Axel Void has painted a very fitting mural entitled Peterloo. It features a portrait of one of the daughters of a Windrush victim and her young son.

Talbot Mill – The other side of the Deansgate Interchange is Talbot Mill. Here you can see one of Akse’s more political pieces: a portrait of Donald Trump shouting at Martin Luther King, rich in symbolism.

Prestwich – Less than 4 miles north of the city centre is Prestwich. Akse’s influence in the city has spread far and wide, and his portrait of Mark E Smith decorates the side of a fish and chip shop.

Southern Cemetery – South of the city, Tankpetrol has painted Alan Turing onto a toilet block in the cemetery.