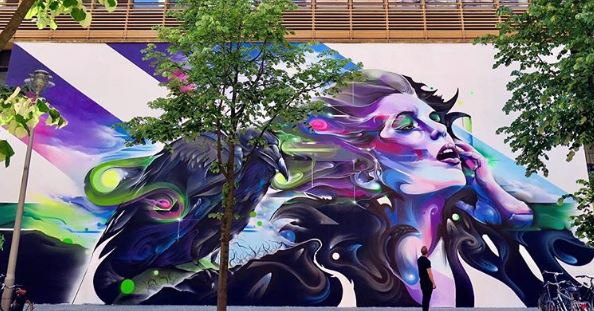 Street art in Berlin began with the Berlin Wall. It quickly became a place for artists to express their ideas and frustrations and to deal with the controversy they faced. Today, this feeling of artistic honesty still prevails. Hard-hitting messages and striking images live on every corner.

As you make your way around the city, look out for iconic Berlin signatures: the tags of Berlin’s largest street art crew, 1UP; El Bocho’s apolitical paste-ups; SOBR’s black and white ravers dancing beside doorways; the Street Yogi’s cork figurines posing on top of walls; and Alias’ strategically-placed stencils of young boys that blend into city life.

Due to the spread of the murals around the city, this walking tour could take upwards of 5 hours to complete. We recommend taking your time, enjoying the views, and uncovering the history of the city as you go.

Victor Ash – Responsible for one of the city’s most memorable pieces, Ash gets much of his inspiration for his stencil work from space, but often uses his art to comment on issues affecting Berlin’s youth.

BLU – An artist who doesn’t try to keep the political commentary out of his work; his murals tackle social issues head on and provide plenty of food for thought.

JR – A paste-up artist whose large-scale artworks break the mould of his chosen form. His particular interest in the plight of the individual gives his work a very moving quality.

Dmitir Vrubel – The creator of the Fraternal Kiss, perhaps the most iconic piece of artwork in Berlin.

ROA – An artist unafraid to deal with themes of death and decay, his work is often arresting in its gruesome detail.

Begin on the East side of the river, on Heinrich-Heine-Strasse. You’ll start with two contrasting pieces: Case McClaim’s signing hands and a colourful instalment in Various and Gould’s Face Time series.

Next, trek across the river to Rosenthaler Strasse. Stop at the Otto Weidt Museum. Opposite, an Anne Frank portrait looks back on the city’s history, and murals by Jimmy C and D Street look on.

Head west, past Monbijoupark to Oranienburger Strasse, home to the How Long is Now mural.

Follow the curve of the river up to Invalidenstrasse, home to one of JR’s only surviving Wrinkles of the City murals. These murals were comprised of posted photographs in 15 different Berlin locations. Usually depicting the faces of the elderly, they were designed to represent the individuals living within the city.

Refuel Point: Schnitzelei
A walk of a few minutes east will bring you to Schnitzelei, who reputedly make the best schnitzel in the city. It’s worth topping up here before you start the walk back south of the river.

Walk south for around half an hour. Stop at Potsdamer Platz to see an interpretation of Maleficent, spray-painted by London-based artist Mr Cenz.

Back towards the city centre is Wilhelmstrasse, on the Mitte/Kreuzberg border. Around the back of number 7, you’ll see the enormous elephant playing with a balloon by S.Y.R.U.S.

Your first stop in the renowned neighbourhood of Kreuzberg is S.Y.R.U.S’s mural of Obama, Merkel, and Putin on Ritterstrasse. Painted in 2014, this piece invokes the Buddhist three wise monkeys in a subversive way.

Walk down Oranienstrasse until you hit ROA’s mural of hanging animals. This piece, as with much of his work, explores the transiency of life. It was completed as part of the Transit Exhibition in 2011, organised by Skalitzers Contemporary Art.

Turn right when you get to Heinrichplatz onto Mariannenstrasse. Bounding above many of the rooftops is Victor Ash’s Cosmonaut. At 22m tall, this is thought to be the largest stencil drawing in the world.

Walk on towards the water, via the Görlitzer Park, to Oppelner Strasse, to see the cartoon man mural by Brazilian twins Os Gémeos.

Two streets down: Cuvrystrasse. Here, artist BLU has put together a mural in two parts, illustrating the on-going political dialogue between East and West Berlin. On one side, a man tightens his neck-tie with gold watch handcuffs. On the other, two men try to unmask each other while making E and W signs with their hands.

Continue along Cuvrystrasse until it intersects with Köpenicker Strasse, the home to another piece by BLU. This time, the mural depicts the fall of the Berlin Wall, and its resurrection as Euro notes. The political message is plain for anyone to see. Also on this street: work by Alaniz, the Berlin Kidz, and a stunning geisha by Fin DAC.

Finish your pathway through Kreuzberg with BLU’s Leviathan on Oberbaumbrücke. This pink figure, when you look closely, is made of hundreds of smaller bodies. Get as close as you can to inspect the detail!

The final leg of this tour takes you back to the East side of the river. Appropriately, start with the East Side Gallery on Mühlenstrasse. This section of the Berlin Wall is the longest remaining. The popularity of the wall with artists as a canvas for political expression remains, and is now concentrated in this one area. Around 120 international artists have claimed a section, including Dmitri Vrubel, whose Fraternal Kiss mural is one of the most well-known sights in the city. Look out also for some light relief in Thierry Noir’s cartoon faces.

Follow the riverside and then turn towards Postbahnhof, to see another of JR’s Wrinkles of the City murals.

Walk a further half hour east for your final three stops. First, a fish mural by Louis Masai at Urban Spree.

Second, on the corner between Boxhagener Strasse and Niederbarnimstrasse is the Kino Intimes gallery wall. Stay for a coffee or a film if you can.

Thirdly (and finally): Rigaer Strasse. Numbers 83 and 94 have long been a canvas for artists to express their political frustrations, so these two buildings stand out beautifully from their neighbours. The evidence of this street’s relevance to historic unrest is etched into these walls.

Refuel Point: RAW-Gelände
Relax after your walking tour with some food at RAW-Gelände in Friedrichshain. Covered in colourful art, this area becomes a street food market on the weekends.

Prenzlauer Berg – Don’t miss Mauerpark in the summer, an anomaly in the Prenzlauer district. You’ll often see artwork being created live. Head to Prenzlauer Allee to see one of the last JR murals.

Lichtenberg – Thedistrict of Lichtenberg is home to hundreds of colourful tags, especially around the abandoned swimming pool by the old Stasi HQ. Seek out Citecreation, an apartment block painted with trees and blue sky.

Tegel Lake – Over on the West side of the city, spend some time at the beautiful Tegel Lake. On Neheimar Strasse, you’ll find a bird painted by Collin Vandersluijs and Mr Super A.

Schöneberg – Just West of Kreuzberg is Shöneberg, home to two pieces by the world-famous Shepard Fairey: Israel/Palestine and No Future. Both are located around Bülowstrasse.