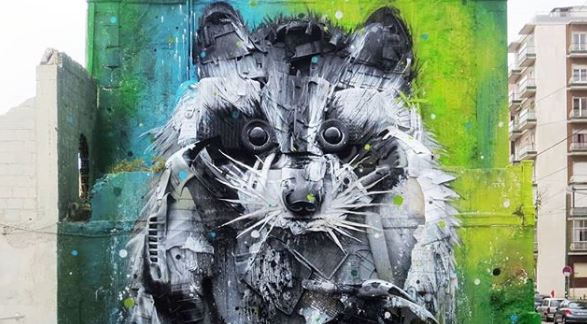 The streets of Lisbon are a blend of traditional and modern, derelict and cutting-edge. The artists who claim the walls seem to capture this in their work, often bringing together unique mediums and techniques.

Projects such as Underdog and The Crono Project have sought to bring new talent to light and new life to abandoned buildings. Inspiring murals, sculptures, and messages can crop up in the most unexpected spaces. Look out for home-grown artists such as Vhils and Bordalo II, as well as celebrated creatives from around the globe.

Start this 4hr walking tour at the furthest point from the city centre and wind your way into the heart of the action. Take in the charm of the Portuguese capital as you go.

Bordalo II – An artist whose animal-themed 3D murals are inspired by his motto, ‘the garbage of one man is the treasure of another,’ and comment on our throw-away society.

Vhils – A Portuguese artist who creates his portraits by blowing away chips of plaster using tiny explosives.

AKACorleone – A Portuguese illustrator with a unique, graphic style based around bold colours and shapes.

North of the city centre, begin your tour on the Avenida Calouste Gulbenkian. Here, you’ll find a piece that will set the eclectic tone for the rest of your Lisbon journey: a portrait of an old man chipped into the wall by Vhils.

Head south past residential streets and green spaces to the Avenida Conselheiro Fernando de Sousa, home to the Amoreiras wall of fame. Countless artists from within the city have laid claim to a portion of this wall. Take in the varied styles before moving on.

Follow the main road, past the Parque Eduardo VII, to the Avenida Fontes Pereira de Melo. As part of The Crono Project, 16 artists have brought derelict walls to life around the city with their vibrant art. A block here has been transformed by the international talents such as the UK’s Lucy Mclauchlan. Os Gémeos and BLU have painted their Corporate Slingshot onto two walls, symbolically taking down a man wearing a crown of logos. Ericalcaine’s enormous Crocodile Tears stands opposite, as does the Shadow Man painted by Spanish artist Sam3.

Take the metro into the Graça area, or look out for more artwork by walking.

Your first stop in the Graça district is on the Rua Damasceno Monteiro. The stand-out wall here is AKACorleone’s Fernando Pessoa-inspired design, painted with local residents to mask the damage done by vandals.

A ten-minute walk past the Capela de Nossa Senhora do Monte brings you to the Rua Natália Correia. World-renowned artist Shepard Fairey has painted his Revolutionary Woman onto a wall here, with a carnation in the end of her gun. Fairey made his name in the mainstream art world when his Obama Hope image made it into his election campaign.

A few minute’s south, on the Rua da Senhora da Glória, Fairey has collaborated with local artist Vhils to produce a portrait in two halves.

Your final Alfama stop: Rua São Tomé. Vhils, commissioned by the Council, has turned the traditional Portuguese paving stones into a portrait of singer Amália Rodrigues.

Refuel Point: Traditional Lisbon ‘Quiosque’
A classic way to eat in Lisbon is at one of the many kiosks. They offer tasty, hearty, traditional food to take away or to eat on street-side tables. Stop off at one in Alfama or the Barrio Alto to refuel at lunchtime and to get a real feel for city life.

Head into one of the city’s oldest neighbourhoods: Baixa. Start with the Rua Manuel Jesus Coehlo. A half-living, half-dead, but very colourful, horse painted by Aryz takes up a towering wall here.

For a more scenic route to your next stop, walk down the tree-lined Avenida da Liberdade. Turn off at the very steep Calçada do Lavra. This street is something of an open-air gallery. Murals and tags decorate every wall, so take your time here.

Running parallel, on the other side of the Avenida da Liberdade is the equally steep and equally colourful Calçada da Glória.

Walk in the direction of the waterfront, keeping your eyes peeled as you go. Stop at the Rua das Gaivotas, where Vhils and English artist David Walker have collaborated on a portrait.

Once you’re ready to continue, head to the Rua Rodrigues de Faria. Dedicate as much time as possible to this penultimate stop. The LX Factory wall here is covered in artwork by Bordalo II, AKACorleone, The Caver, maismenos, and Pedro Zamith.

Your final stop on this walking tour is just off the Santo Amaro Docks. Opposite the Rua de Cascais, you’ll find another portrait by Vhils.

Damaia – In the northwest of the city, Damaia is home to a hyper-realistic Breaking Bad mural by Odeith.

Braça de Prata – Along the eastern coast of Lisbon, you’ll find Sainer’s sky-scraping Crossroads mural on the Avenida Afonso Costa. The Fábrica do Braço de Prata holds the highest concentration of Vhils’ murals in the city, making it something of a must-see if you can travel out that far.

Centro Cultural de Belém – A further 40-minute walk down the coast from the Santo Amaro Docks will bring you to the Cultural Centre. This is an essential stop for those looking to see more of Bordalo II’s work. Here, you’ll find the Racoon Trash Animal, made out of old computer and machinery parts, and a mural known as the Plastic Fox.