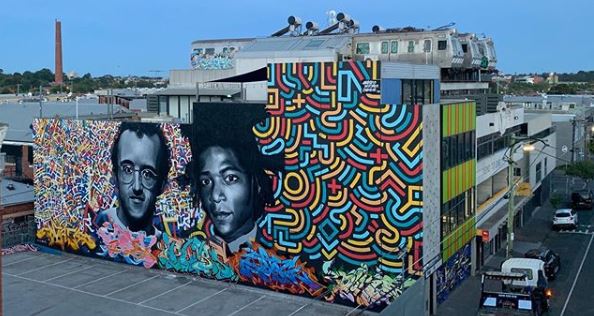 Street art in Melbourne is rooted in much of Australia’s heritage, with artists such as Adnate bringing aboriginal influences into their work. But beyond that, each street tells a story, be it military, environmental, or something from the artist’s personal life. There is always something to learn, discover, and interpret.

Follow this walking tour around Melbourne CBD, Fitzroy, Collingwood, Richmond, and Cremorne to see the best artwork that these districts have to offer. Each has its own distinct feel, with ceramic installations in one area contrasting the portraiture of another.

Take your time walking this route, stopping off at Refuel Points and exploring thoroughly; however, the walk can be completed in under three hours.

Mike Eleven – An artist whose work is known for its powerful visual storytelling.

Your pathway around Melbourne’s streets starts in the vicinities of Fitzroy and Collingwood. Locate Brunswick Street first, to see street art take on an unexpected form: a series of colourful ceramic seats by Giuseppe Raneri. A captivating magpie by MEGGS also lives here.

Head onto Kerr Street to see Mike Eleven’s moving portraits of missing people. The Unmissables collection was developed in collaboration with authors, as well as the friends and relatives of each subject, to flesh out each story.

Refuel Point: Easey’s or Lune Croissanterie
Grab a late breakfast at Lune Croissanterie on Rose Street while you enjoy the view over the street artist markets. Or take a look at the graffiti-filled gardens of Easey’s, as well as the nearby portrait of a pregnant Beyoncé that stands five floors tall.

On Cecil Street, a list of local artists, including Dvate, Adnate, Heesco, and Rone were given sections of this 50m wall on which to depict the diversity of the city. The series is known as the Fitzroy Faces.

Johnston Street is home to one of the city’s most famous murals: a piece painted by Keith Haring in 1984, and restored in 2013. See also Everfresh’s monochromatic Welcome to Sunny Fitzroy mural, and a vast piece by the collaborative group AWOL.

Then, locate Richmond Station, home to a stunning whale painted by Mike Makatron.

As you walk down towards the Burnley Tunnel and the Precinct Hotel, look out for the controversial racehorse mural here. At the Hotel, you’ll see an entirely green wall painted by Dvate, with a central portrait dedicated to his father.

Finish your morning on Balmain Street. Adnate has painted another in his series of indigenous boys here.

In the afternoon, head north into the hub of the city. Start on Meyers Place beside Fitzroy Gardens. Here, Mike Makatron’s mural Jungle Funk was commissioned by the Green Your Laneways project.

Next, turn onto Mcilwraith Place, where a large galah and a bee live by the car park.

Refuel Point: Cherry Bar
Stop to check out this popular, contemporary venue, or return in the evening for a cocktail or two.

On Strachan Lane, Adnate and Vincent Fantauzzo have collaborated on a mural. The rabbit from Alice in Wonderland checks the time in an abandoned doorway.

Your next stop, Duckboard Place, is rich in varied artworks. The Melbourne sign by Steen Jones might catch your eye first, but then look for Lushsux’s tribute to Malcolm Young, the mural of a man holding a tree, Jack Lack’s fish, and a colourful bird by John Murray.

On to another famous Melbourne destination: AC/DC Lane, named after the Australian rock group. Musical murals are abundant, including a psychedelic Jimi Hendrix and a 3D Bon Scott.

Turn down Flinders Street and Russell Street until you reach Beaney Lane, tucked away from the main road. You’ll see countless detailed faces, including a blue portrait by Heesco.

Head further west along Flinders Street until you reach Hosier Lane on the left-hand side. This is something of a central point for street art, featuring a 23m-tall mural of an aboriginal boy by Adnate, that overlooks Birrarung Marr. You will also see the Phillip Island Penguin Parade mural, as well as plenty of poster art and a monopoly-themed piece above the street sign.

Just off Hosier Lane is Rutledge Lane, which artist Adrian Doyle painted entirely baby blue in 2013, covering over all of the existing artwork. But, since then, the other artists have fought back with plenty of new designs.

Refuel Point: Good2Go Youth Project Café
One of the many decorated cafes on Hosier Lane, Good2Go mixes great coffee with a great cause.

After a brief pit-stop, pass the art-deco theme of Degraves Street, the stencil-work of Centre Place, and the intriguing hidden messages of the framed photographs, posters, and paintings on Presgrave Place.

Rankins Lane is home to a cartoon-style mural. The artworks of Caledonian Lane pay testament to its status as the birthplace of the now-international St Jerome’s Laneway Festival.

Two streets west, you’ll come to Tattersalls Lane, the site of a large Adnate mural of a woman with feathers in her hair. Stevenson Lane forms a loop just off Tattersalls; here you can see a mural painted by artist Nelson Cekis.

Known as the most ‘instagrammable’ place in the city, Croft Alley is coated top-to-bottom with colourful tags.

Refuel Point: Croft Insitute
The perfect place for cocktails, the Croft Institute has a mock-science-lab theme.

Turn into Queen Street to see art in every direction, from the men with their heads buried in the ground, to the cartoon bird painted by John Murray and monochrome iconography.

Around Drewery Lane, you’ll find the Melbourne Legacy Centenary of Anzac Street Art mural. The portraits here were put together by the friends and families of war veterans. Two mosaic portraits of Sir John Monash and Stanley Savige stand out.

On Sniders Lane, and in complete contrast, Lushsux has painted a colossal version of Kim Kardashian and Emily Ratajkowskis’ famous naked selfie. Drewery Place plays host to a Renaissance-style Adam, Eve, and Cupid.

Then, continue on to Guildford Lane, rich in industrial heritage, greenery, and quirky cafes.

Next up is Flanigan Lane, where you’ll find a stunning black and white portrait.

One of Melbourne’s most memorable portraits resides on Franklin Street: a female portrait painted by Adnate and Swaze. See also the abstract blue face by Choq, and the goblin graffiti artist.

Finish with a big name in Melbourne Street art: Blender Lane, the home to Blender Studios, responsible of much of the artwork around the city. The unique styles of street art here are inspired by pop culture. Spot sculptures alongside Adnate’s Long Live the King mural.

You are perfectly placed here to finish your day by exploring the Queen Victoria Market.