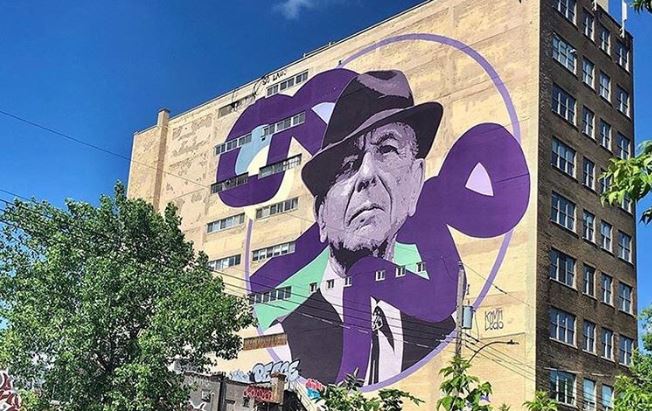 Street art in Montreal is celebrated. The creativity it brings to the multicultural streets has been encouraged by the city for the past 60 years. A proportion of the budget for the redevelopment of public spaces goes on street art, which has enabled the creation of over 3,500 murals so far.

Street artists flock to make their mark on the skyscrapers and community spaces during events such as Mural Festival; so, as you explore, you’re sure to notice artist signatures that are recognised across the globe as well as some local Montreal favourites.

The impossibly long streets of Montreal (Sainte-Catherine alone is 9 miles!) mean that it is difficult to take in one street in a day, let alone the whole city — not if you want to be thorough. So, we would recommend picking one district at a time, and exploring it in its entirety, before you move on to the next.

Kevin Ledo — Responsible for some of the most lifelike and large-scale portraits in the city, Ledo is a Montreal-based artist who blends photorealism with abstract colour.

Roadsworth — A Canadian artist known for painting on roads just as often as he paints on walls, with a clean, graphic, playful style.

ASHOP Crew — A Montreal collective of artists and designers, each with a unique style. Each mural is different, taking the form of anything from naive cartoons to photorealist paintings.

Saint-Laurent Boulevard is known for being something of a cultural, commercial, and artistic hub in Montreal. It stretches seven miles long, and each metre of it is worth investigating for potential artworks.

The 2018 Mural Festival in Montreal left behind a number of incredible works, including Demsky’s optical illusion, inspired by science fiction, and Michael Reeder’s As Real As My Shadow.

On the corner of Prince Arthur Street, you’ll see Kevin Ledo’s portrait of Leonard Cohen, as well as brightly coloured piece by Felipe Pantone that seems to invoke the pixelated screens of old computers. On Prince Arthur Street itself is a 1,200 sq ft swirling mural by Carlito Dalceggio.

At number 3590, Jonathan Bergeron has painted a captivating image of a dilapidated clifftop house with roses emerging out of its roof. At 3523: a classic Pop Art portrait by Dface.

A rare figurative piece by Scribe lives beside the Bank Nationale.

Taking his work to new dimensions, the artist Roadsworth has painted the intersection with Pine Avenue: hands clutching at barbed wire.

The founder of the ASHOP Crew, Fluke, has paid tribute to Jackie Robinson, the first black payer in Major League Baseball, with a colourful mural.

At 4328, a vibrant Miss Me and Aydin Matlabi collaboration.

Brightening up a car park, and in complete juxtaposition with its surroundings, PICHIAVO’s mural mixes classical art with bold graffiti in their depiction of Diana/Artemis.

Refuel Point: Schwartz’s
Schwartz’s has a reputation for serving the best smoked meats in the city. Be sure to stop by for a taste of this Canadian favourite.

Though Saint-Laurent Boulevard runs through the heart of the Mont-Royal Plateau, it’s essential that you venture onto the streets either side. The artwork is less concentrated, spread across the seven blocks between Sherbrooke Street and Mont-Royal Avenue, but there are plenty of gems to discover.

On the Rue Saint-Dominique, the artist MEGGS has an entire building dedicated to his work. Look out for the shells, flowers, and mystical waters. An eye-catching female portrait by RONE also stands out.

Park Avenue is home to an instantly recognisable typographical work by Ben Eine. Between the Napoleon Street and Rue Roy East junctions is a dreamlike mural painted by Tremblay and Poni, both of whom are known for their ethereal visual storytelling.

On the intersection between Saint-Laurent Boulevard and Guilbault Street: a quirky mural by Ola Volo.

Near the Fine Arts Museum on Crescent Street, iconic and unmissable on the city’s skyline, is the 1,000 sq m portrait of Leonard Cohen, painted by Gene Pendon and El Mac.

At 9 miles long, Sainte-Catherine Street has many pieces of art to see, if you can manage the trek. A favourite is the Fear and Loathing in Montreal mural.

On the Rue Saint-Cuthbert, at its junction with Clark Street, a mural by Five8 occupies the wall. Complete with abstract neon lettering and a nearly geometric approach to shading, the female portrait is typical of Five8’s style.

On Clark Street itself, between the junctions with Rue Marie-Anne West and Rue Rachel East, you’ll see one of ROA’s detailed depictions of death and decay. On the corner of Rue Evans: a piece by Axel Void. Pixel Pancho stakes his colourful claim on the space between Mont-Royal Avenue and Marie-Anne Street East.

Towards the eastern end of Clark Street, it intersects with René-Lévesque Boulevard West. At number 36, you’ll see the famous Chinatown Mural, which marks your entry into a new neighbourhood.

On the corner of Jeanne-Mance Street, as it meets Sherbrooke Street, you’ll find a mural of mythical creatures painted by Mexico City’s Curiot.

To the west of the Mont-Royal Plateau, is Mile End. An essential stop is Saint-Viateur Street, home to an impressive line-drawing of the Montreal skyline and another piece by Ola Volo.

Refuel Point: Saint-Viateur Bagels
Serving the best bagels in the city, cooked in a wood-fired oven. No further explanation needed!

At number 5605 De Gaspé Avenue, at Aire Commune, Ola Volo has created a 15,000 sq ft mural. This makes it the largest mural to ever have been produced by a female artist in Canada.

A little off-the-beaten track is the Van Horne Overpass. The pillars and blank spaces underneath are covered in artwork, including an image of the Minotaur seemingly holding up the road above.

Further north, on Laurier Avenue East, in the playground of the École Laurier, is a totally unique mural with a fantasy feel. The almost radioactive colours are reflected in the tarmac surface on rainy days.

The districts of Saint-Henri (affectionately called The Hen by locals) and Little Burgundy sit towards the waterfront on the east side of the Mont-Royal Plateau. Saint-Henri is rich in political artwork; much created by Native American artists. The group known as Unceded Voices: Anticolonial Street Artists’ Convergence, have painted many stunning images of indigenous women on Saint-Henri streets. On the corner of Saint-Antoine Street and Saint-Jacques Street, you can see one of these portraits, painted by Jessica Sabogal in 2017.

In Little Burgundy, Saint-Jacques Street embodies this neighbourhood’s status as one of the birthplaces of Jazz in Montreal and North America. Many murals depict Jazz and Rock legends, including Kevin Ledo’s portrait of Daisy Peterson Sweeney. Between Richmond Avenue and Guy Street, you’ll see Roadsworth’s homage to the Canadian Pacific Railway and the Steel Company of Canada and Jazz.