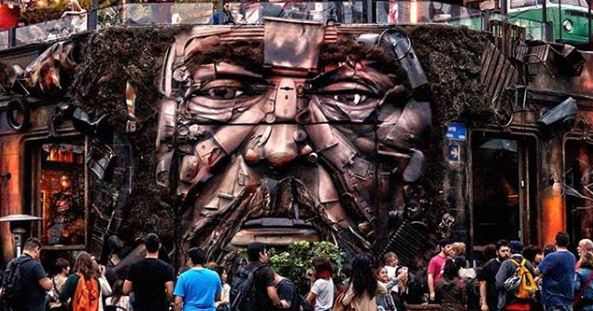 Street art in Buenos Aires began with paid political propaganda in the 50s and 60s. Since, it has developed as a reaction to politics and social and economic issues, rather than a support. Artists such as Jaz, Alfredo Segatori, BA Paste-Up, and BLU respond to controversy through bold, public statements.

Look out for tributes to the late President Néstor Kirchner, who pulled the country out of the economic troubles of 2001, as well as criticism of his successor and contemporaries. As you walk around, many streets are charged with energy, injustice, and passion; but just as many are bright with humour and artistic flourish. This tour strikes a balance between the two.

Since 2009, the BA Street Art organisation has been encouraging artists to take to the streets.

If you’re in Buenos Aires for a weekend, or a couple of days, divide this tour up. Allow around an hour for each district. Artwork is spread far and wide, so get cabs between destinations if you can.

Jaz – Known for his larger-than-life zoo animals. Jaz uses a cheap asphalt paint, petrol, and emulsion mix as a nod to the restrictions artists felt during economic troubles of 2001.

Alfredo Segatori – An artist whose figurative work appears all over the city, sometimes incorporating elements of sculpture, but always with an impressive scale.

BA Paste-Up – A group of six local artists, each with a unique style. Their work can be both comedic and politically-charged.

Martín Ron – A local artist known for his photorealist skills, which he blends with elements of the surreal.

This street art walking tour begins in the small residential neighbourhood of Coghlan. Unknown to many Buenos Aires residents, it’s recognised internationally for it street art. Get a cab to Nuñez 4035, and the huge Jaguar mural here: the perfect introduction to the bold, fearless Buenos Aires art.

From Nuñez, head east, then south down Ricardo Balbín onto Avenida Melián. At 2925, you’ll see the Siempre Verdadoro mural by El Marian, depicting a man and his dog.

Onto Estomba: at 3184, see the 3D rhino by Ice exploding out of the wall, and a delicately painted African woman opposite; at 3101, Primo has painted a portrait of Jeo Daley.

Finish your meander through Coghlan at the Hospital Pirovano on Avenida Monroe. Three sides of this hospital are covered in mural, so be sure to do a loop.

Next, head into the Villa Urquiza neighbourhood. Stop at the corner between Dr. Pedro Ignacio Rivera and Holmberg to see El Cuento de los Loros, a stunning mural by Martín Ron. The four-storey mural features the face of local architect Clarindo Testa, parrots, Michelangelo’s David, and an expressive portrait, all on a skateboard.

Palermo might be the most famous Buenos Aires barrios, and Colegiales is its modest neighbour. Start with the Plaza Matienzo. Here, you’ll find murals by the likes of Jaz and Jim Vision, painted as part of the Meeting of Styles Festival in 2011.

Head down Conesa, and right onto Avenida Dorrega, until you reach the Mercado de las Pulgas. This block is known for its street art. At 1735, Campos Jesses has painted a modern day version of Frida Khalo. On the back wall you’ll find a piece in the Urban Mirrors series by Alfredo Segatori: a Cartonero taking a cigarette break. Look out for Santiago Spirito’s stencil of artists demanding more paint; a popular theme following the economic crash of 2001.

Next, the Calle Santa Rosa in Palermo Soho. A building here has been taken over by BA Paste-Up. The Palermo Soho area is rich in quirky alleyways. Check out the decorated bars of the Pasaje Soria and the Pasaje Russel in particular.

Walk further south to the Desarmadero Bar for drinks and a bite to eat. On the outside, Segatori has sculpted a portrait on the wall out of recycled rubbish.

To the north of Palermo are the Bosques de Palermo. Under the overpass here, Alfredo Segatori has filled the blank walls with murals of tango dancers, Carlos Gardel portraits, and a man playing the bandoneon.

Restaurants serving modern street food have been set up under these archways.

Then, just south, in Recoleta, is the Centro Cultural Recoleta. The facade of this museum is repainted by a different artist on an almost monthly basis, in time with the changing exhibitions.

Head into Villa Crespo. Look out for portraits by Nicolas Romero Escalada, each with distinctive rainbow colour streaming from their eyes. At 982 Serrano, an Escalada mural depicts Karl Marx with nine kittens.

Focus your artistic search in Almagro around the Abasto Shopping Mall. The Casas Fileteadas should jump out of you, each painted in a similar style, with flowers, swirling patterns, and flags.

Heading further south brings you into San Telmo. Stop briefly on México at 257 to see a piece by Cyzer that has brightened up an otherwise vandalised building.

Then, move on to the Avenida Indepencia. A mural here by BLU depicts a crowd of people with their eyes and mouths covered by the Argentinian flag. A figure, believed to be President Cristina Fernández Kirchner, leads them.

As you navigate San Telmo, look out for the iconic sculptures that make up the Paseo de la Historieta, or Comic Strip Walk. The best-known, Mafalda, sits on the corner of Defensa and Chile.

In La Boca, we recommend getting a taxi between the two points.

Start with the Usina del Arte. The site of the ColourBA 2016 Festival, this area is dense with impressive artwork. On the side of the Usina, you’ll see a two-storey-high cowboy asleep on a horse. The nearby overpass houses plenty more art.

Then, travel south to the Caminito, where more works were produced during ColourBA by international artists. Stay within a block, but look out for works by Ben Eine and Jaz.

Your final stop is Barracas, in the south of the city. Start on Calle Lanín, where artist Marino Santa María had his workshop. Santa María wanted to bring his artwork to the people, and so 35 of the houses here bear either his paint or mosaic work.

Half an hour’s walk south along Vieytes will bring you to El Regreso de Quinquela, one of the most important pieces of artwork in the city, and an impressive final stop. This is the world’s largest mural painted by just one artist. Segatori painted this 2,000 sq m mural in homage to the artist Benito Quinquela Martín and the neighbourhood of La Boca that he loved.

Espacio Memoria y Derechos Humanos – A powerful insight into the city’s history of unrest, this additional stop shows you how important street art can be in tackling social issues. Look out for the wheat-paste collages of the faces of those who disappeared during the dictatorship of the 70s and 80s, the barcoded girl by Milu Correch on the entrance gate, and the mural by Nazza Stencil that features the logo of the Sons and Daughters for Identity and Justice Against Forgetting and Silence.