E.L.K paints in heart of Sydney 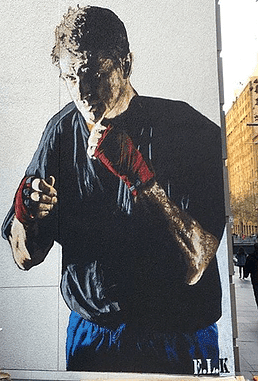 This week I have had the pleasure to watch, meet and chat with Australian stencil streetarist Luke Cornish aka E.L.K painting this brilliant portrait of Father David Smith at Martin Place in the heart of Sydney’s CBD, which has just been finished (I happen to work around the corner).

Father Smith, also known as Fighting Father Dave is the only Australian in Holy Orders to have won state and national boxing titles. He’s been fighting the good fight for over two decades; using boxing and martial arts to steer youth away from a life of drugs and crime.

E.L.K and Father Smith actually know each other quite well after recently returning from a mission to Syria called Boxers For Peace, which Cornish said was a life-changing experience. I bet.

This installation is part of a streetart project being launched by the Australian bank, ANZ, on unused walls across Sydney, recognizing local people with inspiring stories to tell. In addition to E.L.K, three other of Australia’s most celebrated street artists Stormie Mills, Adnate, and Kaff-eine will bring to life portraits of those who have made strong contributions to their communities. It sure is a great way to connect the Sydney community through street art. Brilliant stuff.

I’m hoping to interview E.L.K soon, so keep an eye out.