Sandra Chevrier is a Montréal-based Canadian pop artist, known for her captivating portraits of women. Born in 1983, Chevrier first fell in love with art as a kid and rapidly became a self-taught artist. She obtained her Bachelor’s degree in Visual and Media Arts from UQAM (Université du Québec in Montréal). When her son was born, she quit her job as a chef in a sushi restaurant to fully dedicate her life to her son and to art.

At first, Sandra Chevrier drew sketches of eyes, calling herself a “gaze collector”, an obsession which is still highly visible in her present work. When she paints, the artist starts drawing the eyes of her female characters, thus revealing their emotions and sensibility. She then adds on their faces layers from the superheroes world, partially covering their faces like a mask and hiding their feeling and flaws. Initially Chevrier directly stuck torn pages from comic books on the painted portraits, now she paints them with impressive realism. In this way, all of Chevrier’s portraits show a dichotomy between power and fragility and emotional enigmas.

Her « Cages » series launched her career as an accomplished artist. From this moment, galleries have never ceased to propose her solo exhibitions, print releases have sold in seconds and celebrities like Alicia Keys contacted her to acquire her artworks. The « cages » are definitely a feminist series as they symbolise women’s imprisonment, their limitations and the cages women have allowed to bar them from the fullness of life’s experience. Chevrier’s subjects denounce the role given to women and often show them in scenes of conflict, defeat ans struggle. Chevrier’s portraits play on the opposite concepts of power and fragility, freedom and captivity as well as reality and imagination, depicting women torn between the fantastical heroines of comic books and the oppressed female identity.

Exhibiting her « Cages » in a male-dominated world, Sandra Chevrier chooses to highlight the fragility of the superhero, their struggles and weaknesses, and exposes the humanity within the superhuman. She wanted to show that superheroes are also fragile and are merely human men and women with flaws and errors.

On the occasion of the 100th anniversary of the passage of the 19th Amendment which gave the women the right to vote in the USA, Sandra Chevrier collaborated with American street artist Shepard Fairey on the creation of a massive 12-story mural in Austin, Texas. Entitled « The Beauty of Liberty and Equality », the mural celebrates gender equality. It fuses both artists’ distinctive styles : it shows the character of Wonder Woman breaking a chain with her bare hands painted by Shepard Fairey and a massive portrait of a woman by Sandra Chevrier. The portrait is surrounded by multiple messages and images that evokes the history of women’s rights in the USA.

Since 2013 Sandra Chevrier’s has participated in numerous group and solo shows throughout the world and has painted murals for various street art festivals. In 2018 she has held her first museum solo exhibition. The exhibition entitled « Cages and the Allure of Freedom » was curated by Thinkspace Gallery at the Museum of Art and History of Lancaster (MOAH), California. In this exhibition Chevrier showcased large-scale sculptural works for the first time including three massive portraits alongside three life-sized, hand-painted busts complementing some of her largest two-dimensional acrylic on canvas works. 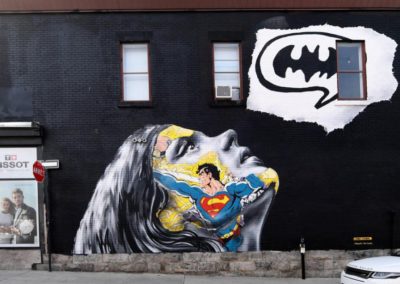 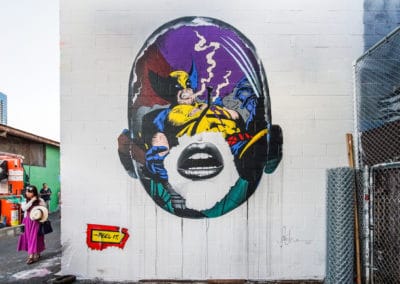 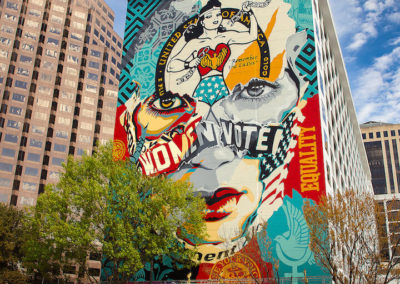 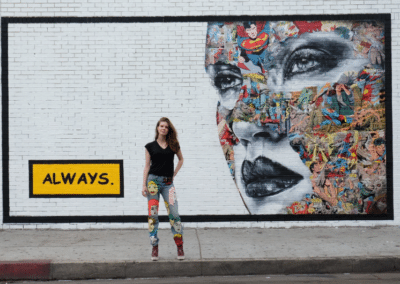 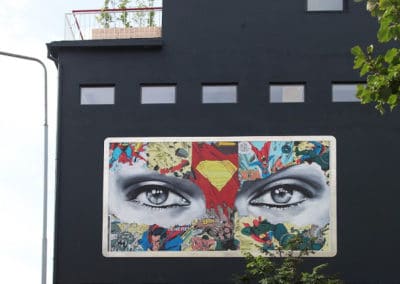 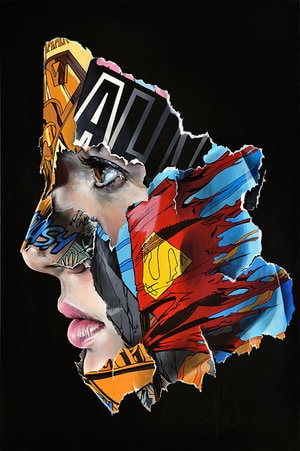 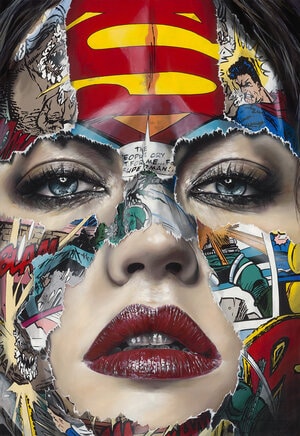 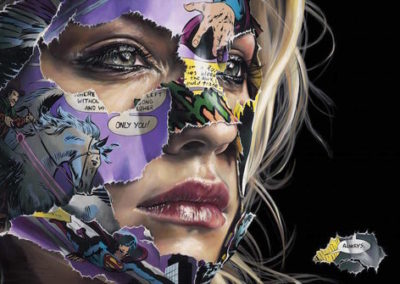 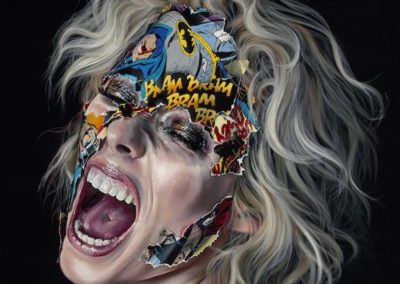