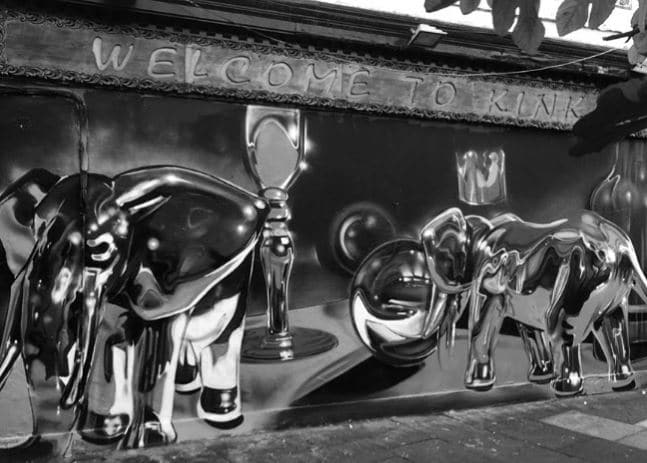 As the capital city, you’d expect London to be rich in street art and creative talent. No area of London disappoints. Every street has its own signature, and every bar and restaurant has its own unique view.

Here, we’ve put together a mix of well-known names like Banksy and Mr Cenz, with some more mysterious names and faces. The aim is to give you a taste of what’s popular now, and what you should watch out for in the future!

Such a large city would take days, or even weeks, to properly explore, but we’ve broken it down into five key areas you can get round in a day. Transport recommendations between each are given, but are subject to change.

Fanakapan – A London-based artist who specialises in creating hyper-realistic shapes by playing with light and shadow contrasts.

Sweet Toof – An internationally-renowned artist whose work often features large teeth and jaws as a symbol of mortality.

Gregos – A French artist whose 3D casts of his own face have made their way across the Channel to the UK.

Arrive into Waterloo Station. If you’ve come from further afield, this will be via a National Rail service; but, if you’re a local, you might come in on the tube.

The first stop on this tour is right underneath you. The Leake Street tunnels have long been a favourite with artists. Their popularity has been nurtured by several painting events run by Banksy, including the Festival of Cans.

Next, head out towards the Southbank Centre on the waterfront. Undercroft is a hub for skaters, so has become popular with graffiti artists looking to practice their craft. The Southbank Centre has donated this area to the artists, which is now managed in collaboration with Global Street Art.

From Waterloo, join the Jubilee Line, and change at Canada Water for the overground to Shoreditch High Street Station.

Wander down Shoreditch High Street and see if you can spot Gregos’ 3D sculpted face emerging from a doorway.

Rivington Street is a popular spot for big names in street art. You’ll catch a few classic pieces by Banksy, as well as work by Ben Eine, Cranio, Rolla, and Stinkfish.

The Ravey Street area is rife with hoardings curbing off new developments, which attract graffiti artists like moths to a flame.

On Leonard Street, head into the Pure Evil Gallery.

Great Eastern Street is home to the Shoreditch Art Wall. The art here changes so regularly that it’s impossible to predict what art you might see. Sometimes, brands commission their own street art advertising, but it quickly gets covered up. A permanent fixture on this street, however, is Let’s Adore and Endure Each Other by Steve Powers; a mural topped by two graffiti-ed tube carriages.

It’s a similar situation on Holywell Lane. The Village Underground wall is reinvented every few months.

Refuel Point: Quaker Street Coffee & Bubble Tea
A tiny café dedicated to street art, Quaker Street has outdoor seating so you can enjoy the Shoreditch atmosphere while you refuel.

Walk down Commercial Street on your way to the next stop. A portrait of a girl is painted onto the side of Toynbee Hall, making use of the creeping ivy for her hair.

On Corbet Place is something of an iconic pairing: D-Face and Banksy’s car, who supposedly crashed into each other. You’ll also find a 3D bow and its arrows a few hundred feet away.

Head to the Star Yard off Fournier Street. The car park here is peppered with graffiti work by up-and-coming talents.

Next is Fashion Street, smattered with ironic art. You’ll find a Batman mural, a portrait of Arnold Schwarzenegger, a purple female portrait, a painting by Mr Cenz, and a drip-painted portrait of a man and child on the side of Joe’s Kid Café.

Head over to Heneage Street next, where Lewis Campbell has taken over three empty poster spots with his piece Hear No Evil, Speak No Evil, See No Evil.

On Princelet Street, the well-known stick-figures of Stik shelter in an archway. You’ll see these trademark characters pop up elsewhere in the city, so keep your eyes peeled.

Head next to Hanbury Street, the home of the famous ROA wall. Just around the corner you’ll also find a vibrant abstract piece by Bicicleta Sem Freio.

Buxton Street brings you more 3D sculptures, including a mask by Gregos, and a stencil piece by Orrible.

Fanakapan has made his mark on Pedley Street with one of his signature glass elephants. You’ll see another of his murals on Brick Lane.

Also on Brick Lane, and possibly one of the most famous pieces to appear on this tour, is Banksy’s French Maid. Brick Lane and its surrounding streets are worth investing some time into. Have a look around every corner to make sure you don’t miss anything. Many of Global Street Art’s 850 commissioned murals can be found here.

Refuel Point: Monty’s Bar
A popular hangout for local street artists, Monty’s Bar has a very creative vibe and a lot of its own art to discover.

North of Brick Lane is the Nomadic Community Gardens, which hosted the Meeting of Styles in 2019. It has always been a quirky bubble of energy and art in one of the greyer areas of Shoreditch, so stop by to see the colour and the constantly changing décor.

Finish your Shoreditch loop back at the High Street Station and head on to Hackney Wick via the overground, changing at Canonbury.

From Hackney Wick Station, head north for the River Lea Navigation. Go as far as you can, and then walk down along the riverside south. Hackney Wick is full of warehouse spaces that are a melting pot for artistic talent. Sweet Toof has claimed the River Lea Navigation as his own territory through the sheer number of pieces he’s added to the walls.

Refuel Point: Number 90 Bar & Restaurant
A great place to grab some lunch, you can also see the Martin Ron Murales’ mural on Wallis Street from Number 90.

Finish up on Fish Island, and make sure you wander down every street here. Artists such as Ali Hamish, 616, The Real Dill, Nemo, Himbad, Tim Chris, and Pang come here to practice new ideas and develop new pieces. It’s a real insight into the creative process.

Walk back to Hackney Wick Station and catch the overground to Kentish Town West.

A lot of the artwork in Camden Town has recently been lost to redevelopment work, but there are still many rare gems to uncover. Look out for works by the artist Bambi, whose identity still remains under wraps. Walk from Kentish Town to Chalk Farm Station. Here, you’ll find an impressive Kobra mural, as well as an incredible Mr Cenz portrait and a piece by Gnasher.

Make your way down Camden High Street, spotting work by Señor X, Vanesa Longchamp, and more sculpture work by Gregos as you go.

Turn off at Hartland Road to see the stunning rainy night scene in Tokyo painted by Dan Kitchener. You’ll have to untangle the knot of works by Amara poor Dios, Gnasher, Irony, Captain Kris, Trust Icon, Cranio, Señor X, Vanesa Longchamp, and the Nomad Clan too before you move on.

Follow the High Street along to Jamestown Road, where you’ll find John Lennon mural by Gnasher.

Continue up Camden High Street and turn off at Miller Street to see a mural by nature-loving artist Faunagraphic. Then, head to Camden Town Station.

Catch the Northern Line to Euston, and then change for the Victoria Line.

Arrive into Brixton Station. Here much of the artwork has been led by the Save the Arches Campaign, which saw street artists come together to contest the ongoing gentrification in the area.

At the station itself, much of the artwork has remained since the 70s and 80s.

Take a detour to the east to Coldharbour Lane to see the ominous Nuclear Dawn mural, painted in 1981 by Brian Barnes and Dave McCrea and a handful of residents living in the building. It now has the devotion and protection of both the locals and the council.

Back in the direction of the station, you’ll come to Tunstall Road. The stand-out piece here is a portrait of David Bowie painted by Jimmy C in 2013.

Finish this tour with a stroll up Brixton Hill, tracking the countless murals on your way. Streatham Hill Station sits at the top, or you can choose to wander back down to Brixton Station instead.

Listing all the street art hotspots in London would be a never-ending task, so wherever you are in the city, make sure you’re always on the lookout. Each of the five locations we’ve covered here deserve far longer than a quick forty-minute look, so if you can let this tour overflow into a second day and incorporate some more self-guided exploration, do!